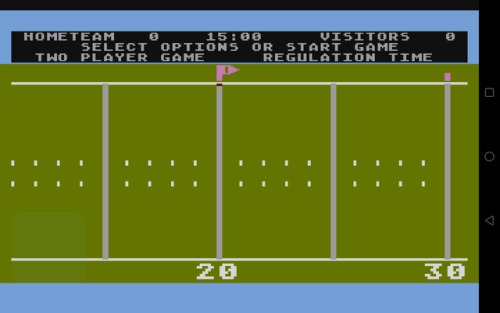 Atari Football, also known as just Football and most commonly RealSports Football, is a very early and very rudimentary football video game. I mean very rudimentary. It plays kind of like the old LED handheld football game by Mattel with slightly improve graphics. Limitations include: Despite all of these limitations, for the time it was released (1982), it was probably one of the best sports games out there. RealSports Football was also released on the Atari 2600 and Atari 5200. It does not appear that much effort was put into improving graphics or anything else for the 5200 and Atari 8-bit versions. Still, if you are looking to give it a try, the Atari 8-bit (and Atari 5200) version does offer slightly better graphics and sound…slightly.

Obviously, football games and sports game in general progressed very quickly from this point. There isn’t much point playing this game against the computer since there are so very many much better football games out there. However, like many older games, it can still be a blast to play against someone else, at least for short bouts. 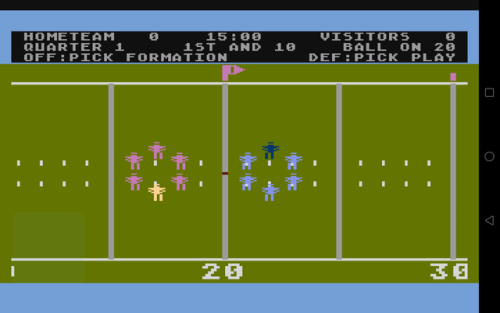 While there are commonly annual sequels to sports games today, RealSports Football had no sequel. There were a number of other games in the RealSports lineup though, including baseball, boxing, soccer, tennis, and volleyball. The images above are from the Atari 8-bit computer version of the game.