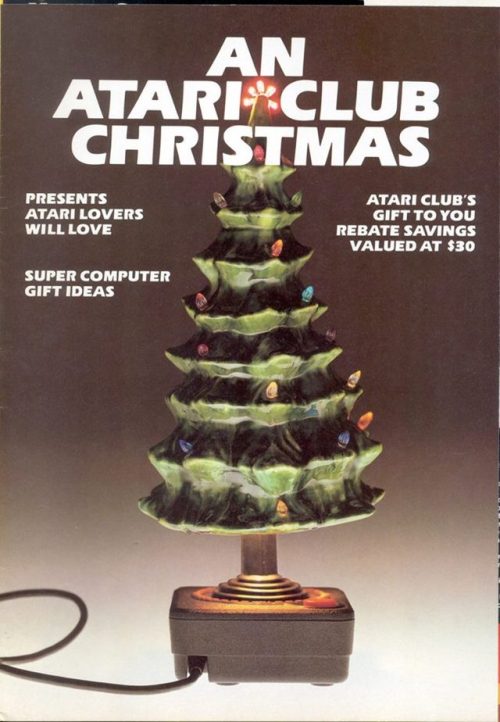 Atari Club was and Atari fan club of sorts you could join for $1. For your dollar you got a subscription to Atari Age and discounts on various Atari merchandise. This catalog was also mailed out to club members for the Christmas 1984 season and includes various discounts and deals. I’m not sure how these compared to what you could get at your local K-Mart (or wherever) though.

Atari had so much cool stuff in 1984 but it is a shame they could not get their marketing and pricing right. Their lineup was too complicated and innovation in terms of new games was at a low point. It is interesting to look at this catalog and get an idea of what their strategy was though. This page has various accessories and other Atari related paraphernalia. A few of those things would be neat to have today like that Atari mug (7), hat and scarf (5), and that VCS carrying case (9). I think I have one of those “Modular Cartridge Library” game holders (3). Trackballs, joysticks and other game and game system storage devices are here as well. Those remote control joysticks (12) look especially cool but $69 is extraordinarily expensive, especially for the time. This page features the Atari 5200. It’s interesting to note that the Atari 2600 does not seem to be featured in this catalog. They still sold it and would for years to come but it isn’t here. They seemed to want to sell you an Atari 5200 with an Atari VCS adapter instead for $215 (after rebate). That’s over $500 in today’s dollars. Not a bad strategy. Push gamers towards the new system while maintaining backwards compatibility. The problem was this was a huge amount of money for a system that had already been out a couple of years, especially when they had the Atari 7800 ready to go but refused to market it. The Atari 5200 was a capable enough system but Atari seemed to want to mostly push new and improved versions of games it released for the Atari 2600 instead of innovating. The NES was already out in Japan and would be released in the U.S. in less than a year at a price of $179 (club discount not needed) just for comparison.

The carrying case and trackball look pretty cool but not at those prices. 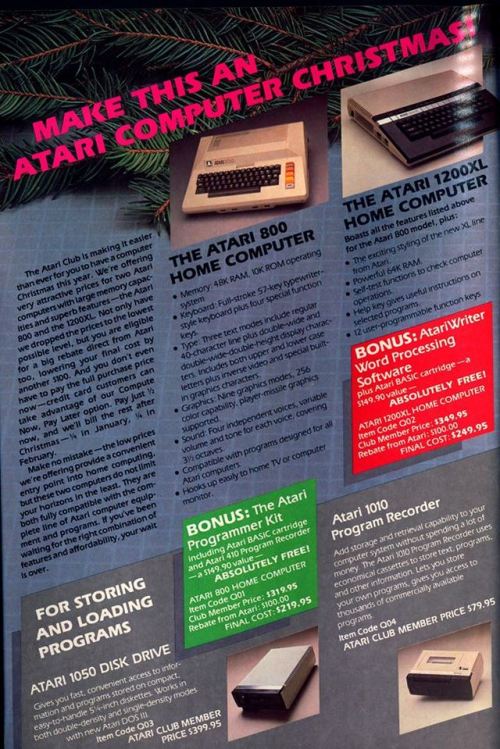 Now we get into the computer line. Basically at this point they were pushing two computers. The Atari 800 was one of the original two computers Atari introduced in 1979 and was serving as their low end model at this point. The Atari 1200XL was Atari’s first attempt to update the line to compete with the Commodore 64. Unfortunately, it was still too expensive and suffered from a number of problems. The Atari 600XL and 800XL would soon take its place. The Atari 800 was about the same price as a Commodore 64 at this point but the 1200XL was a closer match in terms of capabilities but was far more expensive. And that disk drive was astronomically priced at $400. Commodore’s disk drive was about half as much at this point. I suppose there was always the “Program Recorder”.

Another page of Atari 5200 stuff. It just has the system priced without the Atari 2600 adapter and game. Though you can see a list of games available here too. As you can see, the vast majority of these were available for the Atari 2600 and those are some pretty high prices for games that had, for the most part, been around for several years in one form or another. 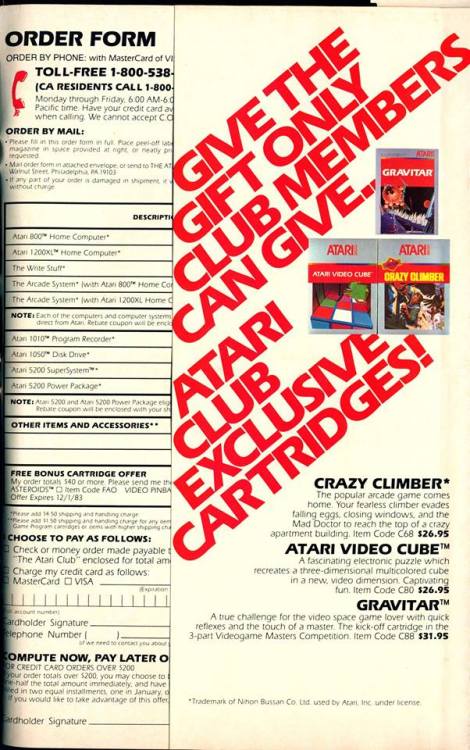 Here we have some exclusive Atari Club games for the Atari 2600. These games are pretty rare today because of their limited release. Gravitar was released to stores with a different label but the original silver label is hard to find. 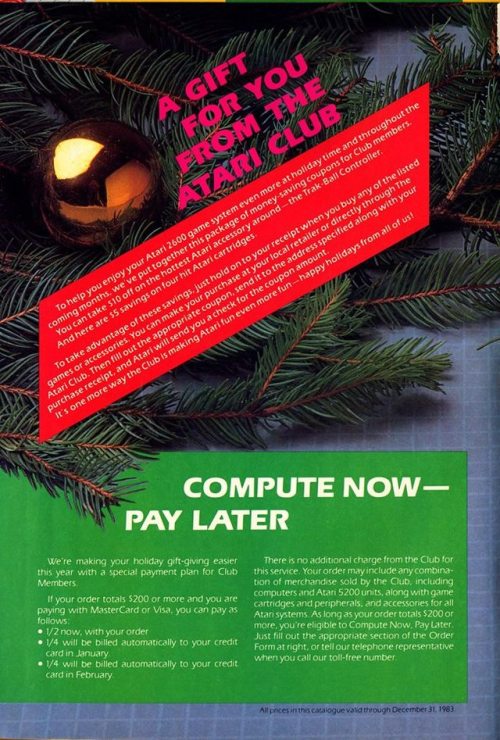 And who wouldn’t want to finance their expensive Atari purchases with easy payments?

Finally, we have some more computer stuff just packaged with other items. It mostly looks like a way to jack up the prices to me. At least I’m not sure the things they are adding are worth the price increase over the base systems.

Atari had a lot of nice things, particularly the computers. It’s just that the prices were really too high and they made some dumb marketing moves. The Atari 7800 should have been in this catalog along with some innovative games and they should have courted some decent third party development as well. They also had the opportunity to market the NES but that’s another story. They made some of the same mistakes with the Jaguar nearly a decade later. They also would have also been better off to simplify their computer line. This catalog features the 2nd and 3rd iterations of their 8-bit line. There would be another four iterations not counting the ones that were announced and/or developed but never saw the light of day. I’ve always been an Atari fan but I’m glad I had a Commodore 64.