Advertisement for SwordQuest EarthWorld, FireWorld, WaterWorld, AirWorld for the Atari 2600 from the January 1983 issue of Video Games magazine.

via Retro Gaming / Advertisement for SwordQuest 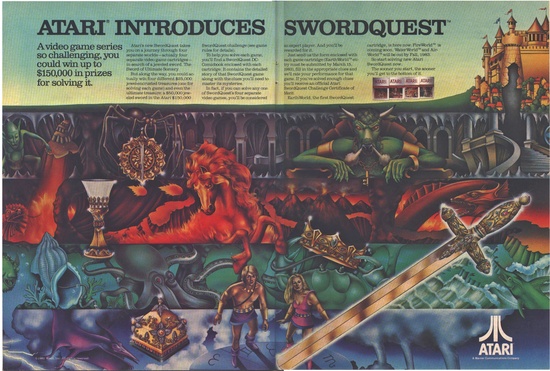 The SwordQuest games were meant to be a series of four action/adventure games (among the first of their kind) produced by Atari for the Atari 2600. Each game was meant to be a contest with the winner receiving a prize worth $25,000 (at the time). The solution to each game was part of a larger puzzle that when solved would have resulted in a larger grand prize. Unfortunately, due to the video game crash of 1983 and Atari’s subsequent financial difficulties, the series was never completed. The first game, SwordQuest: EarthWorld was released in 1982 and was originally intended as a sequel to Adventure. It resulted in 5,000 entries into the competition with only eight people managing to find all five of the correct clues. The ultimate grand prize winner won the “Talisman of Penultimate Truth” which was made of 18K gold with 12 diamonds and birthstones of the twelve Zodiac signs embedded in it. There was also a sword made of white gold attached. Alas, the winner supposedly melted down the Talisman to pay taxes and the sword stolen. Supposedly he still has the gems though. Swordquest: FireWorld released in 1983 was the second game in the series and it had far more entries into the competition than the previous game. The winner won “The Chalice of Light” which was made of gold and platinum with citrines, diamonds, jade, pearls, rubies and sapphires. As of 2005, the winner still possessed it. SwordQuest: WaterWorld released in 1984 was the third game in the series and was only available to Atari Club members. The winner of this contest was supposed to get “The Crown of Life” which was made of gold with aquamarines, diamonds, tourmalines, rubies and sapphires. There seems to be some uncertainty about whether or not the final for this contest was actually held and the prize awarded.

The final game in the series, SwordQuest: AirWorld, was cancelled as was the AirWorld competition and the final grand prize competition. The prize for the AirWorld competition was to be a “Philosopher’s Stone” which was to be a large white jade in an 18K gold box with diamonds, emeralds, citrines and rubies. The grand prize was to be the “Sword of Ultimate Sorcery” and valued at $50,000. Apparently the prizes were produced by The Franklin Mint and the final two (or three) prizes were produced but recycled into other items when the final contests were ultimately not held.

Each of the games are all part of a single story line involving twins named Tarr and Torr. Their parents were killed by the King’s guards because of a prophecy that said one day the twins would kill the king. The twins themselves were hidden away and raised as commoners. Their identities are ultimately revealed and adventure ensues. Each of the prizes were also important artifacts in the games.

Generally speaking, all of the games play in a similar manner and are reminiscent of Adventure though they are somewhat more sophisticated. Your job is to collect items for which you sometimes have to defeat enemies or other obstacles. When you have the correct items in the correct rooms, numbers would be revealed that were a clue where to look in the comic books that came with the games for the correct words. Sending the correct phrase to Atari was how you could win the competition.

The advertisement above is from the January 1983 issue of Video Games magazine.

« Hoggetowne Medieval Faire 2013 – Empty Hats – If I Should Fall From Grace With God Commodore Format, December 1990 »