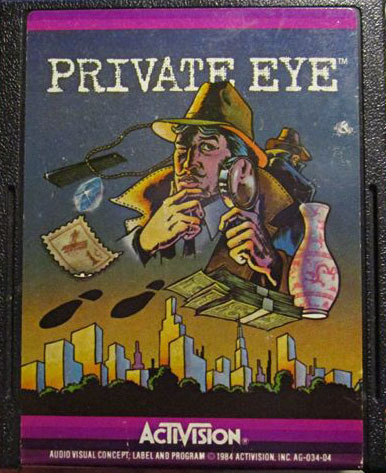 Private Eye, released in 1983, is one of the more obscure Activision releases for the Atari 2600. You play the role of private investigator Pierre Touche whose primary goal is to capture the criminal mastermind, Henri Le Fiend. There are several crimes that have been committed by this Henri Le Fiend and you must find clues and ultimately the property stolen in the crimes in order to arrest Henri Le Fiend.

Each crime is a separate mission that plays as a game variation. In each case, you start with 1000 merit points and can lose them when you run into an obstacle or are attacked by a criminal or gain them when you locate an item or capture a criminal. Each mission has a time limit and running into a criminal will cause you to lose any clue or item you have found and then you have to find it again.

So how does the gameplay actually work? You drive your specially modified Model A around looking for criminals while avoiding obstacles and attacks. When you find a criminal, you can jump up to grab him. He may be hiding a clue or an item. After retrieving the item you have to take it back where it belongs (e.g. a store or the bank).

Reviews are mixed on this one but it is a unique game worth at least trying. If you are looking for an alternive way to play it vs. a real cart on an Atari 2600, it was also available on Activision Anthology. Activision Anthology was released for a number of systems between 2002 and 2012 including Windows, Mac, iOS, Android, PlayStation 2, Game Boy Advance, and PlayStation Portable.