Avalon Hill’s Under Fire! was the war game to have when it was released, at least if you were a war game aficionado. It was a tactical World War II land combat simulator. The graphics were pretty basic but it was the game play that mattered. Based on the ads, it looks like the Apple II version was released first, followed later by ports for DOS and the Commodore 64. The ad above is from 1988 and is advertising the DOS and Commodore 64 versions as a “new conversion”. While not advertised as such, Under Fire was very much like a computer version of Avalon Hill’s board game, Squad Leader. 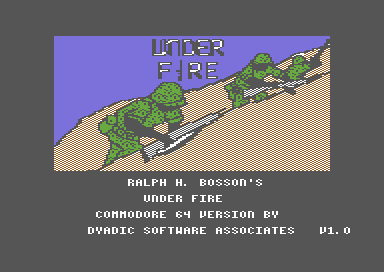 While the graphics weren’t terrific on any system, they were better on the Apple II and Commodore 64 than the DOS version but that was a trade off for slightly slower game play. The main screen was a simple map divided into squares. T