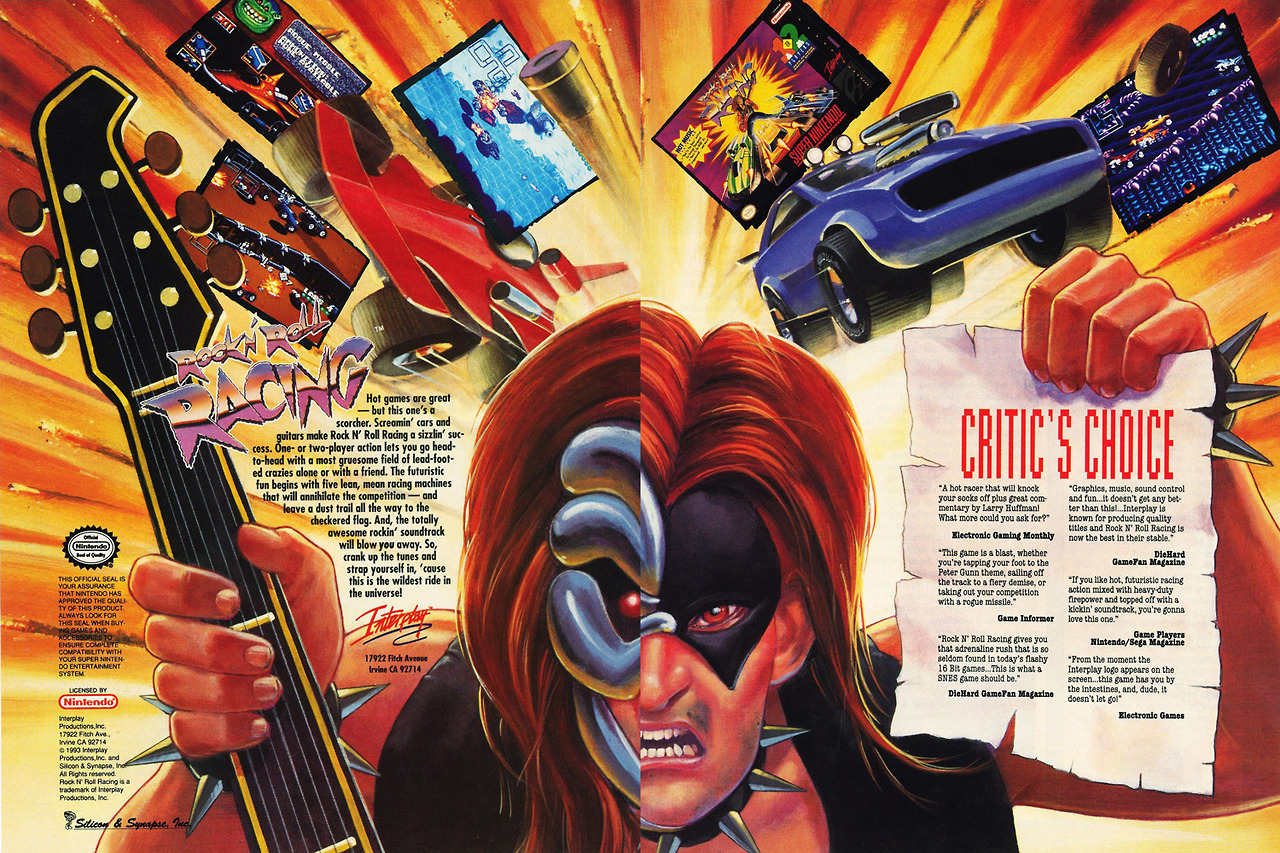 Rock N’ Roll Racing was an underrated racing game released for the Super Nintendo in 1993 by Interplay. It was developed by Silicon & Synapse who later became Blizzard Entertainment. I say underrated but that isn’t really fair. It was awarded best driving game of 1993 by Electronic Gaming Monthly. It just seems like it wasn’t as well known as past popular racers in roughly the same genre like R.C. Pro-Am. Rock N’ Roll Racing was originally developed as a sequel to RPM Racing. At the end of development, licensed music was added by the marketing department and the name was changed. Commodore 64 and Atari 8-bit fans will be interested to know that the logic and A.I. engine for Rock N’ Roll Racing (and RPM Racing) actually came from Racing Destruction Set which is similar to these games in a lot of ways. If you aren’t actually familiar with any of those games, Rock n’ Roll Racing is a vehicular combat racing game. The most popular game that it is close to is probably R.C. Pro-Am. The basic goals are the same. Race other cars while also trying to destroy them and not be destroyed. Between races you can upgrade various aspects of your car (weapons, armor, engine, etc.) It’s huge fun to play against the computer and even more fun to play against a friend. The game also has a password system that allows you to save your game at certain points. This related series of games has a long lineage starting with Racing Destruction Set and continuing on in various ways almost until today. There was a sequel released in 1997 for the PlayStation titled Red Asphalt (prefixed with Rock & Roll Racing 2 in Europe) but this one really isn’t as good as the original. Then there was an Indiegogo campaign by a company called Yard Team for a game called Motor Rock that was released in 2013. It used many assets from the original Rock N’ Roll Racing in addition to new content. It was released on Steam but pulled at the end of 2013 because of copyright infringement claims from Blizzard. However, their website (yardteam.org) appears to still offer a way to register the game through the Steam app with a key that can be obtained with a “small donation”.

Rock N’ Roll Racing is definitely a game worth picking up for the Super Nintendo. Avoid the Genesis version and the later PlayStation sequel but the PC/Steam version might be worth a try (I haven’t tried this one yet myself). If you like games like R.C. Pro-Am or RPM Racing or even Racing Destruction Set then Rock N’ Roll Racing should be right up your alley.