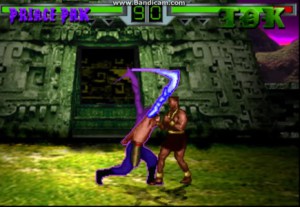 It is not all that often that we receive news that a new Atari Jaguar game has been discovered and released. That is exactly what is going on with Thea Realm Fighters though. Thea Realm Fighters is an unreleased one-on-one fighting game for the Atari Jaguar console. For many, this is a Holy Grail of unreleased games as it was only really shown at the 1995 Consumer Electronics Show. As with most unreleased titles, there are multiple versions and only one is available for download at this time.

Thea Realm Fighters was originally developed by High Voltage Software, the company behind Fight for Life (3D fighter) and the port of NBA Jam: Tournament Edition to Atari Jaguar. On an emulator Thea Realm Fighters supposedly runs almost as slow as Fight for Life does on an actual Atari Jaguar console. On actual hardware AtariAge members have reported using various Skunk Boards to play the beta version of the game and stated that it is quite decent in speed. Your mileage may very well vary.