Batman: The Caped Crusader was developed by Ocean and released by Data East in North America in 1988. The game features both action and puzzle solving. While you have to beat up some bad guys, puzzles and maze navigation are emphasized. This game was released for several popular home computers including the Commodore 64, Atari ST, Amiga, DOS and Apple II. Interestingly, the NTSC release of at least the Commodore 64 version is slightly different in that it has slightly different music and more aggressive enemies making it a little harder. 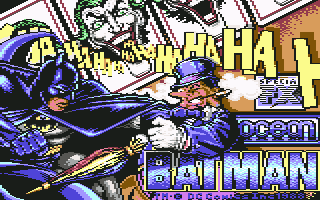 As far as the Commodore 64 version goes, the graphics are good and the music is excellent. The graphics feature a unique comic book style where new scenes pop up in new panels over the old ones which fade into the background. Batman: The Caped Crusader actually consists of two separate games. One featuring the Joker and the other featuring the Penguin. 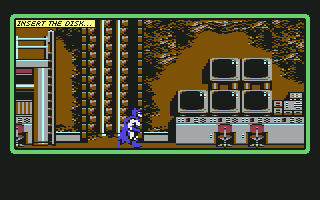 While this is a pretty decent game, figuring out what to do can be a little difficult and the inventory scree is pretty confusing as well. Having the instructions probably helps. While the Commodore 64 version is pretty good, it probably takes a back seat to the Amiga and Atari ST versions because of their better graphics. You may actually like the music better in the C64 version though.