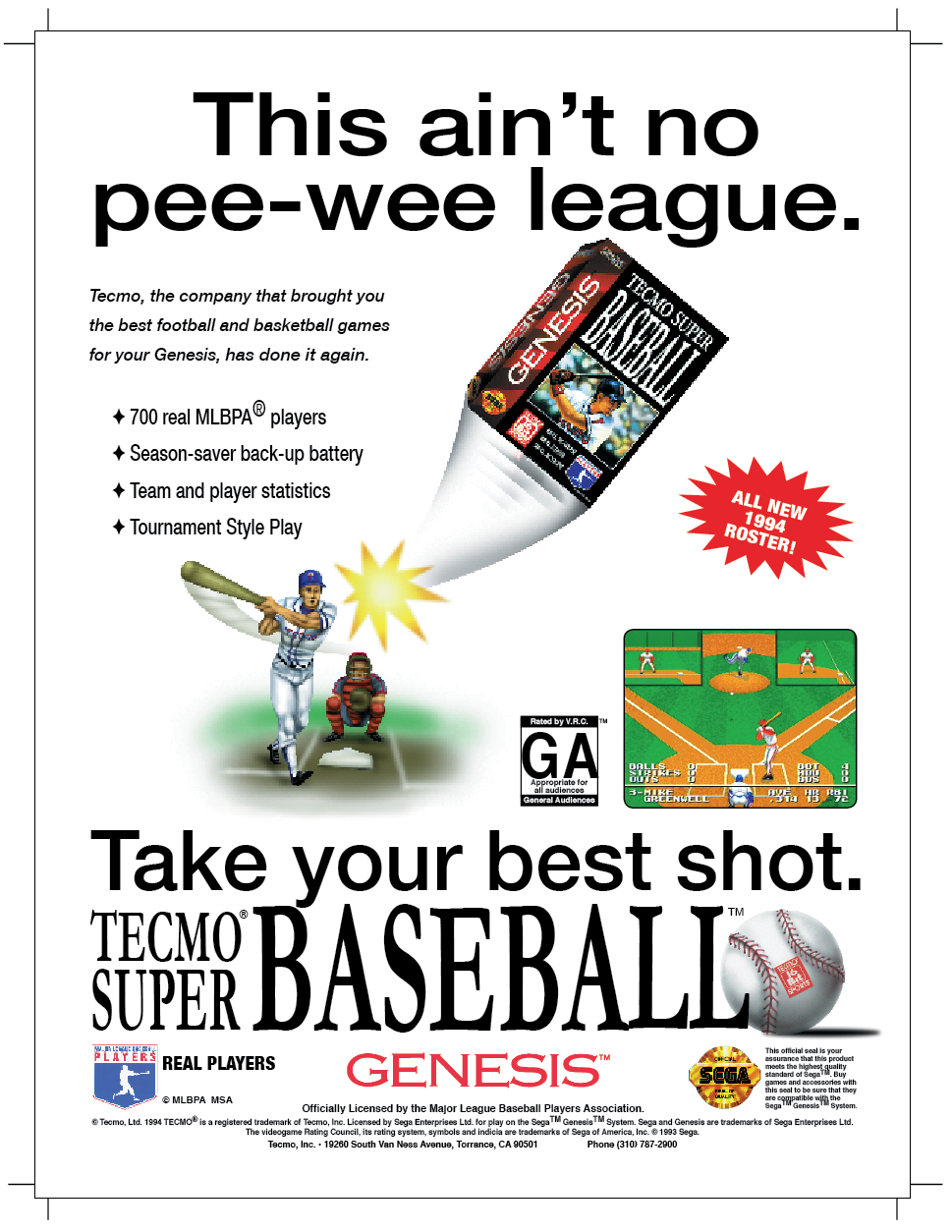 There must have been fierce licensing competition between Tecmo Super Baseball and Sony Imagesoft’s ESPN Baseball Tonight. While the ESPN game got the MLB license in 1994 and hence the license to use the team names (but not the real player names), Tecmo Super Baseball got the Players Association license and therefore the license to use real player names (but not the team names). Both games were released in 1994 and both were released for the Super Nintendo and Sega Genesis.

While the Tecmo Super Baseball ad above just references the Genesis version, it was available for the Super NES as well. I suspect the Genesis version just came a little earlier. Other than not using real team names, it faithfully recreates a full season of baseball (based on the 1994 season). While Tecmo Super Baseball is not an outstanding game, I would pick it over the ESPN game. Tecmo was better known for their football games, at least for a while, but they did an ok job with baseball too.

You had a choice of playing a pre-season game (an exhibition game), a full season, including the World Series, or an All-Star game (called Super Stars for copyright reasons). The game included the 1993 statistics for all of the players and also kept track of statistics for the current season. As far as stats go, it was a pretty impressive game. There were also a fairly large number of options. Music was mostly lackluster and sound was satisfactory if nothing special. Graphics too were just satisfactory but there’s nothing particular to complain about. Gameplay was just ok. It seems to have all the right parts but on the whole it come across as a fairly average game. For some reason there seems to have been a large number of baseball games published in 1994. They all have their strengths and weaknesses and this one is no exception. It seems that none of them got both the MLB and Players Association license.

Tecmo never made a sequel to this game though there was a predecessor on the NES. Most sports simulations don’t really hold up well over time and I don’t think this one is any exception. Many better baseball games have been released since. If you are truly interested in giving it a try, the Genesis version is probably best but the SNES version is close enough for it not to matter too much.