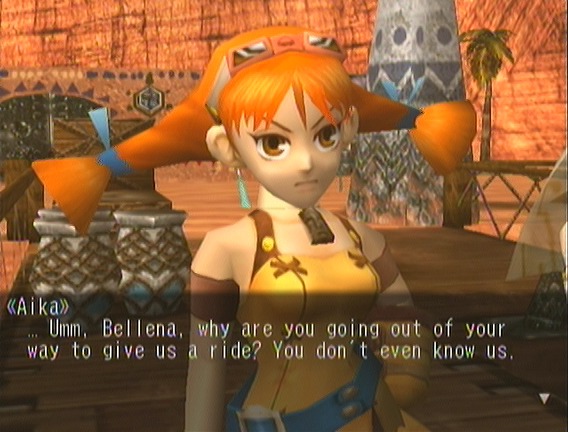 Skies of Arcadia is a role-playing game published by Sega for the Dreamcast in 2000. It is a Japanese style RPG similar to the Dragon Quest and Final Fantasy series. It is an excellent game and was loved by critics. However, excellent reviews apparently didn’t translate into the kind of sales that Sega was expecting. This was probably more a reflection on the declining sales of the Dreamcast in general after the introduction of the PS2 than on the game itself. The game has a fairly unique premise that involves exploration via flying from floating island to floating island in an airship. At times, battles with other airships are also involved. After reaching an island, there are various above and below ground locations to explore.

This game, being a Sega release, was originally an exclusive for the Dreamcast. However, after support for the Dreamcast was dropped, a slightly enhanced port was released for the GameCube. Versions were also initially planned for the PS2 and Windows but were never completed. No further sequels or remakes have since materialized. Today, if you want to play this game, the Dreamcast or the GameCube are the only way to do it. The GameCube version generally has slightly improved graphics and frame rates but you lose out on a few minor features like a mini game and messaging on the Dreamcast’s VMU. The Dreamcast version is generally rated higher but only because expectations for improved graphics had risen so much in the two years since the original release, largely thanks to the PS2. Both versions are essentially the same game and both are excellent.