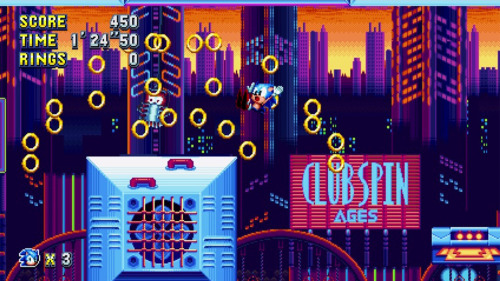 Back in July, fans of the classic era of Sonic the Hedgehog were pleased to hear that a throwback title called Sonic Mania was in development for a 2017 release. Now, the game’s collector’s edition has been unveiled — and it’s everything that a retro enthusiast could have hoped for.

A deluxe collector’s box will house a metallic card that bears the download key for the game itself. Unfortunately, there’s no physical disc, but some carefully considered pieces of nostalgia have been assembled to make up for that omission, according to a report from Polygon.

Related: 16-Bit Sonic is back, and he’s looking cooler than ever

The package also features a recreation of a Sega Genesis cartridge with Sonic Mania graphics, referencing the game’s mission of revisiting the classic 2D gameplay of the earliest games in the series. The collectible has one of the gold rings that Sonic accrues in game connected to it.

The nostalgic theme continues with a 12-inch statue of Sonic the Hedgehog standing atop a Sega Genesis console. This lovingly crafted figurine would certainly appeal to fans in and of itself, but it boasts an extra piece of functionality that’s sure to please anyone that owned a Sega Genesis system back in the 1990s.

Flicking the power switch on the miniature console will play the classic Sega jingle that was heard during the boot sequence for many first-party games released for the system. Given that nostalgia is such a huge selling point for Sonic Mania, it wouldn’t be too surprising if the game opened with the sound effect, too.

Sonic Mania is set to release for PlayStation 4, Xbox One, and PC in 2017. The collector’s edition box is set to retail for $70 — unfortunately for international fans of the high-speed hedgehog, it’s been confirmed that the package is only going to be available in North America.