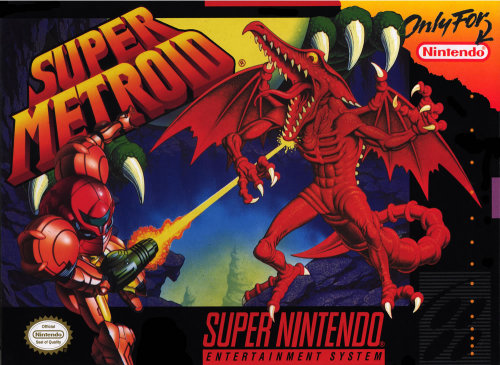 The Metroid series, at least up to and including this game, was a 2D side-scrolling action adventure series. The gameplay of Super Metroid was much like the gameplay of its predecessors with some enhancements. In addition to the much prettier graphics the 16-bit Super Nintendo allowed, Super Metroid also featured a new inventory system and the ability to fire in all direction in addition to other enhancements. Super Metroid would be the last game in the Metroid series until Metroid Fusion and Metroid Prime were released eight years later. There were high expectations for Super Metroid and it lived up to them. The game received very good reviews, won numerous awards and sold well. The one thing that may have held it back somewhat was the fact that it was released relatively late in the life of the Super NES. Nevertheless, this one definitely goes on the list of must have games for that platform. Beautiful graphics, excellent gameplay and a large world to explore are some of the highlights. In this iteration, the player as Samus has brought a Metroid larva to a space colony where scientists hope they can harness its power. However, just after she left the colony, the Space Pirates attacked and stole the larva. Now you have to search for the stolen larva and battle the Space Pirates in their newly rebuilt and expanded base.