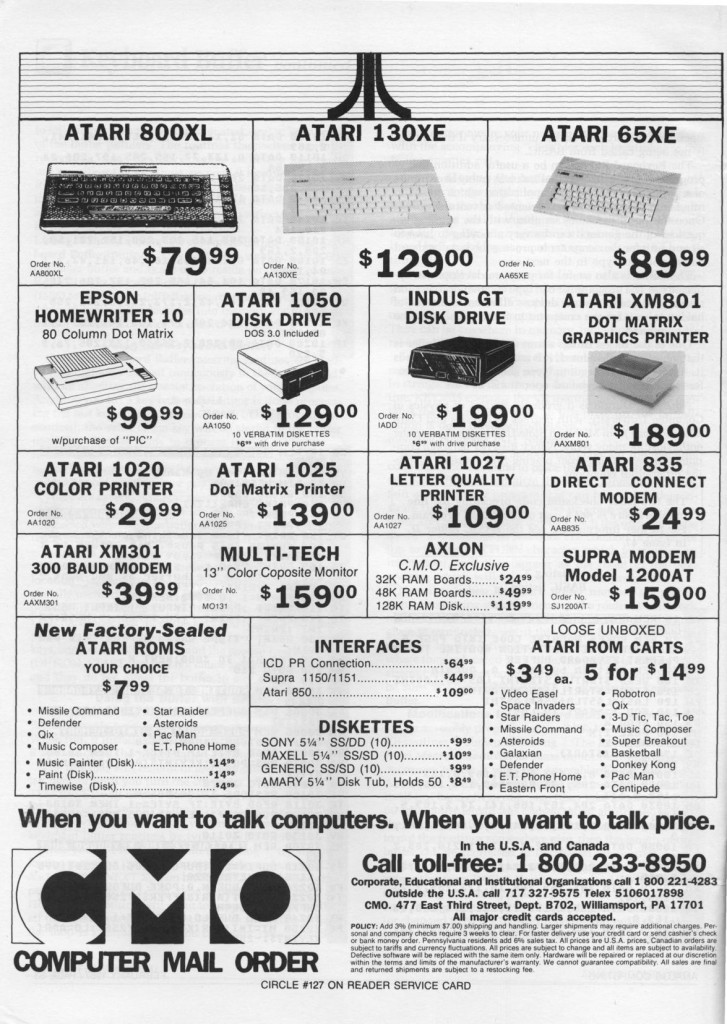 Above is an ad for various Atari 8-bit hardware sold by a mail-order company called CMO (Computer Mail Order…how original!) This ad is from the February 1987 issue of ANALOG Computing (an Atari specific magazine of the time) and shows a pretty good cross section of the Atari 8-bit hardware available at the time.

At the top we have the various Atari 8-bit computer models available in 1987. The original Atari 400 and 800 had long been discontinued by this point and were no longer available. The 600XL isn’t here either and the 800XL was probably limited to stock on hand since the new XE models were being sold. I think the 800XL is by far the best deal here. While the 130XE had more memory (128K vs. 64K) and a couple of other nice features, the keyboard was too mushy and not nearly as nice as the one on the XL line. Very little software (if any) ever took advantage of that extra memory anyway. The 65XE is essentially a 130XE with only 64K of memory.

Next up are disk drives and printers. The Atari 1050 was the basic double-density drive for the Atari 8-bit line at this time. Any disk software you had for the Atari would work with this drive. The Indus GT was the luxury drive. It was faster, quieter, more reliable and had nifty added features like displaying the track that was currently being read. It also could add CP/M capability. I don’t have an Atari 8-bit any more (I was always more of a Commodore 64 person anyway) but my ideal setup would be an Atari 800XL with an Indus GT drive.

Finally, this ad includes various peripherals and upgrades including printers, modems, and memory upgrades among other things. That 300 Baud Atari modem may have been a bargain but the extra money for the 1200 baud Supra and an interface would have been more than worth