Indiana Jones and the Temple of Doom (arcade)

Indiana Jones and the Temple of Doom (arcade) 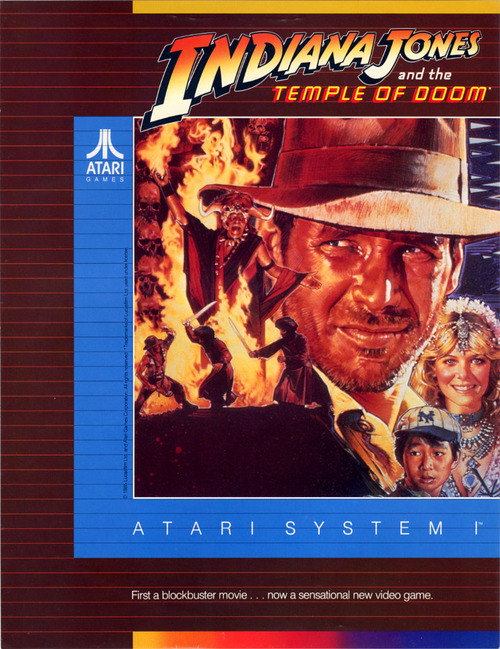 Indiana Jones and the Temple of Doom was originally developed by Atari as an arcade game for the System 1 arcade hardware and released in 1985. As a movie license game, it was a reasonably decent effort. The game play was just ok but the graphics and sound were very good for the time. This was the first System 1 game to include digitized speech and John Williams’ soundtrack is also included. The game is essentially a side-scrolling platform type game. There are three stages based on scenes from the movie including rescuing captive children, escaping from the guards in a mine cart, and recovering the Sankara Stone from the sacrificial altar. These scenes are repeated four times with more obstacles in each iteration. In the 4th and final iteration, the last stage is replaced by a boss fight with Mola Ram, the arch villain. There were a number of home ports of this game, some of which were very good and others of which were not. While 16-bit ports like the Atari ST version tended to be very good, the 8-bit ports, particularly the Commodore 64 version were pretty bad. This was due more to the game being rushed than a lack of technical capabilities. Like most games that start as arcade games, the arcade version is still the best. If you want to play this game in any form you will have to use emulation or track down original hardware and software. There aren’t any re-releases that I am aware of and I’m sure that’s due in part to licensing issues.