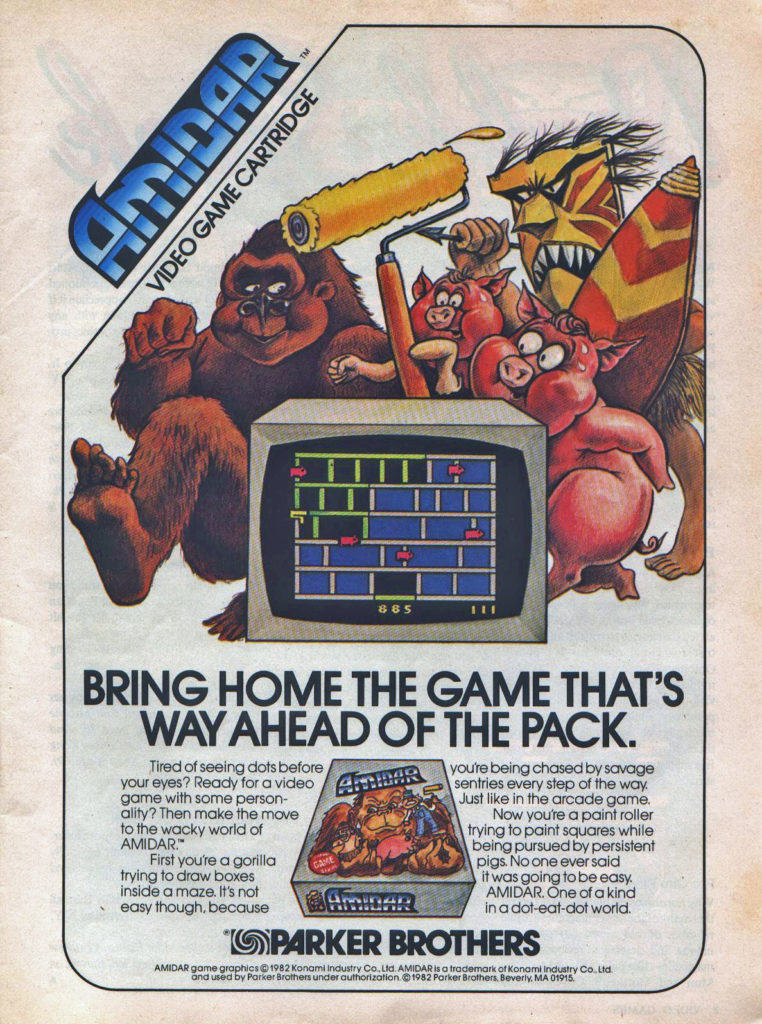 Amidar was released as an arcade game by Konami in 1981. As this was near the height of the popularity of the Atari 2600, it’s unsurprising that it received an Atari 2600 port the following year. While this ad doesn’t specifically mention the Atari 2600, that was the only home system that it was released for at the time.

This game makes fun of the endless maze games that were essentially knock-offs of Pac-Man. Ironically though, this game was really just another take on that concept. Amidar is really nonsensical as far as what you are doing in the game. On odd numbered levels you control an ape who must collect coconuts while avoiding headhunters. On even number levels you control a paint roller and must paint over each spot on the board while avoiding pigs. I have no idea what these two things have to do with each other.

Other play mechanics are very much like Pac-Man. Touching enemies normally kills you but by clearing a board you are temporarily able to kill enemies by touching them (as if you ate a power pellet in Pac-Man). However, there is the rather unique jump button. Instead of making you jump it makes all your enemies jump and you can then walk under them. As you might expect, as the level increases, your enemies get faster and more numerous.

The Atari 2600 version along with a 1983 release for the obscure Japanese only Casio PV-1000 are the only official releases I could find reference to. There were various knock-offs for various home computers that came a few years later. However, if you want an official home version you’ll have to find the Atari 2600 version. You can also always emulate this game but if you are going to do that, you might as well find the arcade version. Apparently, the arcade version of Amidar was re-released for the Xbox 360 and Windows via Game Pak 12 for Game Room in 2010 but I believe that it is no longer available.

Screen shots above are from the Atari 2600 version of Amidar. The ad is from the January 1983 issue of Video Games magazine.