Inside Your Atari VCS 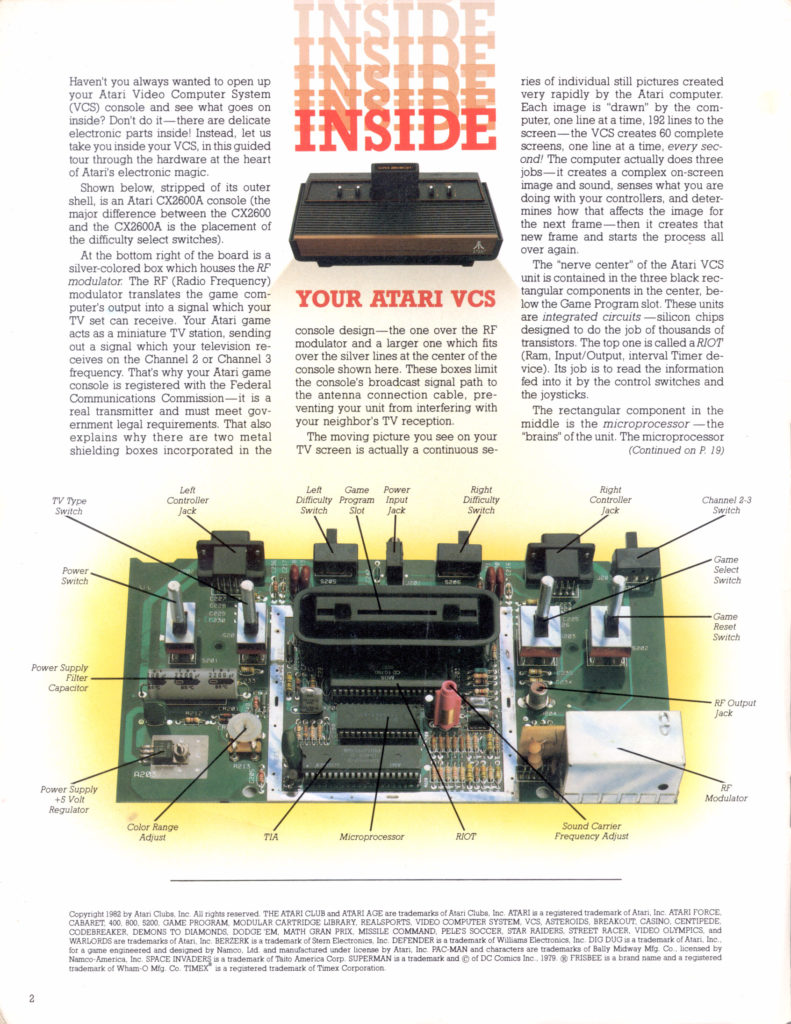 One of the best kinds of articles in video game magazines were technical articles about new systems. I’m talking about before the internet made this sort of information available at the drop of a hat. Here we have an ‘Inside Your VCS’ article from the July/August 1982 issue of Atari Age. Of course, they were a little behind the times even for then. The Atari 2600 had been released 5 years before in 1977. Still, it was fascinating stuff for a young kid curious about this sort of thing.

The Atari VCS or Atari 2600 as it was later called, was a pretty simple design, certainly by today’s standards. Most of the functionality of the system was contained within 3 chips. The RIOT (RAM, input/output, interval timer device), the CPU (an 8-bit 6502 running at ~1 MHz), and the TIA (Television Interface Adapter). Most of the rest of the space on the motherboard was taken up by things like the physical interfaces (switches, cartridge port, RF output, etc.) The 6502 or variations thereof were used in tons of machines from that time like the Commodore 64, Apple II, Atari 8-bit computers, etc.

But this was yesterday’s Atari VCS. There’s a new Atari VCS on the way that is quite a bit more sophisticated. It features an AMD Raven Ridge 2 based processor and 4-8 GB of DDR4 memory. And with HDMI output you don’t have to worry about RF interference. The 6502 has in the neighborhood of 3,500 transistors. AMDs Raven Ridge has nearly 5 billion transistors. That’s an impressive difference and I think it even beats Moore’s Law but I’ll let you do the math. The new Atari VCS will have a retro-futuristic design reminiscent of the original VCS but it’s much different inside. It will be Linux based and it will be open enough to be upgradeable (RAM and drive at least) and for you to be able to install your own OS (Windows or another Linux variant).