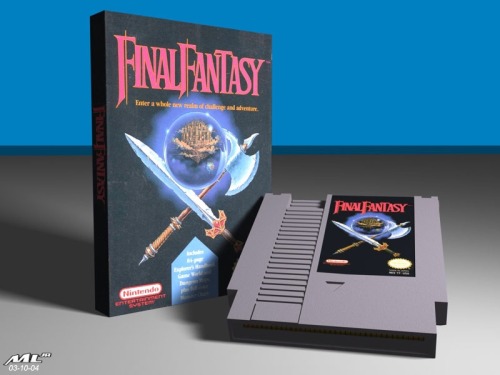 Released on December 1987 in Japan and May 1990 in North America, Final Fantasy was originally going to be creator, Hironbu Sakaguchi’s swan song in the realm of video game design. After a string of non-hits for developer Square, he planned to leave the video game business if this game was a failure too. Instead, Final Fantasy became the first installment of what many people, myself included, consider to be one of, if not the greatest Roleplaying Game franchise in the history of video games.

The premise is a very familiar one to fans of Japanese RPGs. A player creates a party of four characters from six classes. Those classes include Fighter, Thief, Black Belt, Red Mage, White Mage, and Black Mage. This automatically made the game chock full of replay value, as the combinations of party members were mind-boggling, effectively giving the player a different play experience each time they started the game over. After selecting the party, the game takes on the standard format of JRPGs. The player walks around an over world map until happening upon a random encounter and then the screen switches to a turn-based combat view. The player then fights the bad guys until either the bad guys are the player’s party is defeated. Experience is rewarded along with treasure, rinse repeat.

Now of course the storyline of the game is a little more complex than just randomly wondering around a map with no goal. But for the few players who have never experienced FF1 before, I don’t want to spoil a single thing pertaining to the story. So suffice to say that the player is thrust right into the middle of an engaging story right from the very beginning.

Final Fantasy is one of the seminal games for the original NES. It was the game the brought Japanese style RPGs to the North American masses and has spawned countless sequels, spinoffs, ports and remakes as well as plenty of imitators. I’ve always preferred the more American style D&D type RPGs myself but there can be no doubt of the influence and impact of this game. To be fair, the differences between JRPGs and “regular” RPGs aren’t always significant. Final Fantasy involves the player’s party traveling around an overworld map and occasionally (or frequently) engaging in turn based combat as part of their quest to do…whatever it is they set out to do. This isn’t so different than the Gold Box D&D games for example. Really the difference has more to do with style and storyline than with basic gameplay mechanics. Fortunately, Final Fantasy has been re-released more times than just about any other NES game so you aren’t stuck with playing via an emulator or an original system if you don’t want to be. It was released as part of Final Fantasy Origins for the PlayStation in 2003 with updated graphics, a remixed soundtrack and FMV sequences among other changes. In 2004 it was released for the Game Boy Advance as part of Final Fantasy I & II: Dawn of Souls. This version had additional dungeons, more beasts and some other minor changes. In 2007 it was released for the PSP with improved graphics and other changes from the Dawn of Souls release. In 2009 the original NES version was released on the Wii Virtual Console. In 2010-2012 mobile phone versions were released including a version for iOS that was based on the PSP version. There are probably a few other versions I’ve missed but the most recent released was the 2016 release of the original on the NES Classic Edition.

One way or the other, you should give this game a shot if only to see how it all started.

📂This entry was posted in Nintendo (NES) <a href="http://www.megalextor