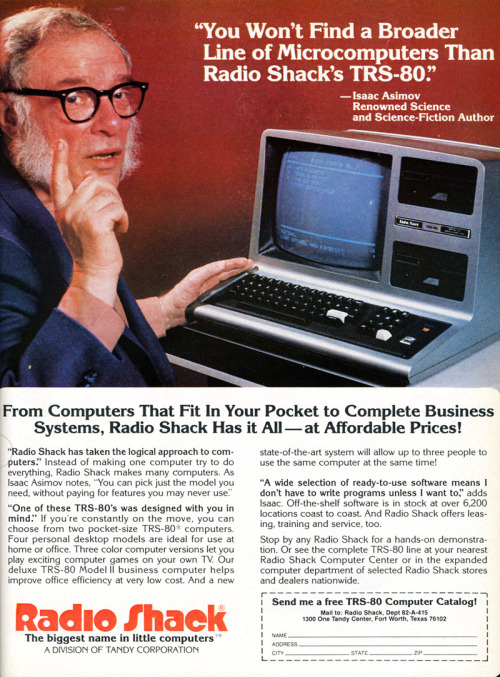 It seems like every computer maker was using some celebrity to sell there machines in the early 1980s. Commodore had the right idea with William Shatner for the VIC-20. Who better to sell a computer than a sci-fi star? Radio Shack did well also with the famed Sci-Fi and science writer Isaac Asimov. Of course, then there was Texas Instruments with Bill Cosby for the TI-99/4A…

I’m not sure that “You Won’t Find a Broader Line of Microcomputers Than Radio Shack’s TRS-80” is the absolute best endorsement they could have come up with but what they were getting at is that there were a number of TRS-80 models that excelled for different purposes. Most computer makers had basically one model or sometimes two. Apple only really had the Apple II at this point, Commodore the VIC-20 and PET, Texas Instruments the TI-99/4A, etc. Tandy/Radio Shack at this point (circa 1980 or so) had the Model II and Model III (unrelated really), the color computer and a couple of portable models. Interetingly they seem to be advertising the Color Computer as a games machine and in the very early 1980s it was still a selling point to have off-the-shelf software available as opposed to having to write your own. Though the Model III is not mentioned by name in this ad, it is the one that Isaac Asimov is using in the picture. 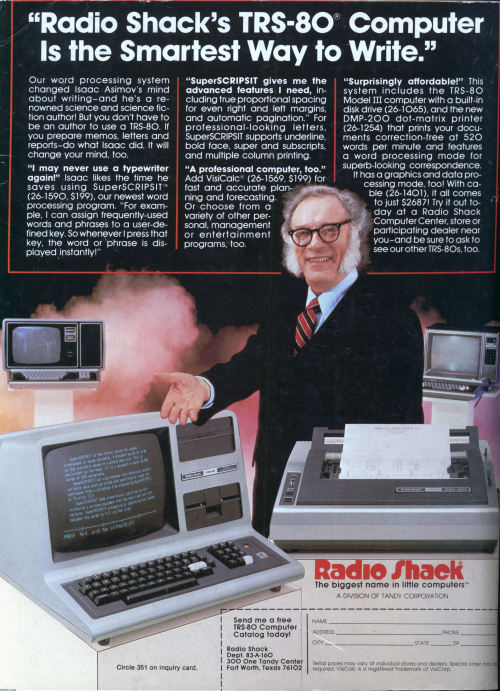 In this second ad with Asimov, he is featuring the TRS-80 Model III and in particular it’s ability as a word processing system. It seem that SuperSCRIPSIT must have been the best thing since sliced bread.

The TRS-80 Model III was probably the most common TRS-80 model at this particular time because of its relative popularity in the education market. Illogically, the Model III was the successor to the original TRS-80 while the Model II was a completely different machine (good thing they didn’t use Leonard Nimoy for this ad). The Model III was completely redesigned into an all-in-one design and had a number of enhancements while maintaining compatibility (at least 80% anyway) with the Model I. The Model III was released in July 1980. In addition to being an all-in-one unit, it had a better keyboard, could now do lowercase letters and had a faster processor (a 2.03 MHz Z-80 vs. the 1.77 MHz version in the original) and faster and more reliable disk and cassette interfaces. The lowest end version still only had 4KB of memory but it was expandable up to 48KB. Two floppy drives could be added to the case (typically single-sided, double-density) though a power supply upgrade and system memory of at least 32KB was necessary to do so. TR-DOS 1.3 was the default OS but other 3rd party DOS versions were also available, the most common being LDOS.

My computer programming class when I was a freshman in high school used TRS-80 Model IIIs and 4s. This was in 1989-90 when they were already long out of date (though the Model 4D was still being sold at this time).

“Hidden in the trash” was a reference to the ancient TRS-80 line of computers made by Tandy and Radio Shack in the ‘70s and ’80s. Computer users of that era had given the TRS-80 the derogatory nickname of “Trash 80.”

« Without the State, Who Would Fine Children for Looking after Pets? Regulation is Stifling Accessible Healthcare »