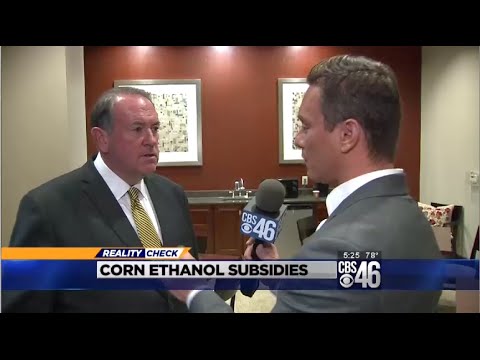 2016 presidential candidate and former Arkansas Gov. Mike Huckabee says that it is the conservative position to support ethanol subsidies for corn farmers in Iowa.

But is supporting corporate welfare for industries really conservative?

I had the chance to question Huckabee one on one, giving his answers a Reality Check.

I asked Huckabee how it could be considered the conservative position to support farmers who have been building out the system of ethanol subsidies when so many would say it’s nothing more than corporate welfare and federal mandates with the government forcing subsidy use.

Corn ethanol receives the trifecta of government support. That is, tax breaks and government subsidies for farmers and ethanol infrastructure; an import tariff on any ethanol producers overseas; and a federal protection mandate called the Renewable Fuel Standard (RFS).

That RFS mandate by the federal government requires 15 billion gallons of gasoline be mixed with ethanol each year, starting in 2015 and continuing through 2022.

So when Huckabee says that government forced these mandates upon the corn industry, it’s not entirely true.

In 2012, the corn ethanol industry spent $22.3 million—or more than $61,000 per day—lobbying before the U.S. Congress and federal agencies. “The private sector went out and invested billions of dollars to carry out that mandate,” Huckabee said. “Now if the government comes back and changes the rules, you have just busted billion dollars in private sector investment.”

The private sector did invest billions of dollars in private capital into an industry that was built upon certain rules, subsidies and mandates. But the problem with Huckabee’s argument is that we should keep a system in place, even if it is unfair and uses law to force consumers to buy a product, because private industry invested in it.