How the Tea Party Became a Populist, Big Government Movement 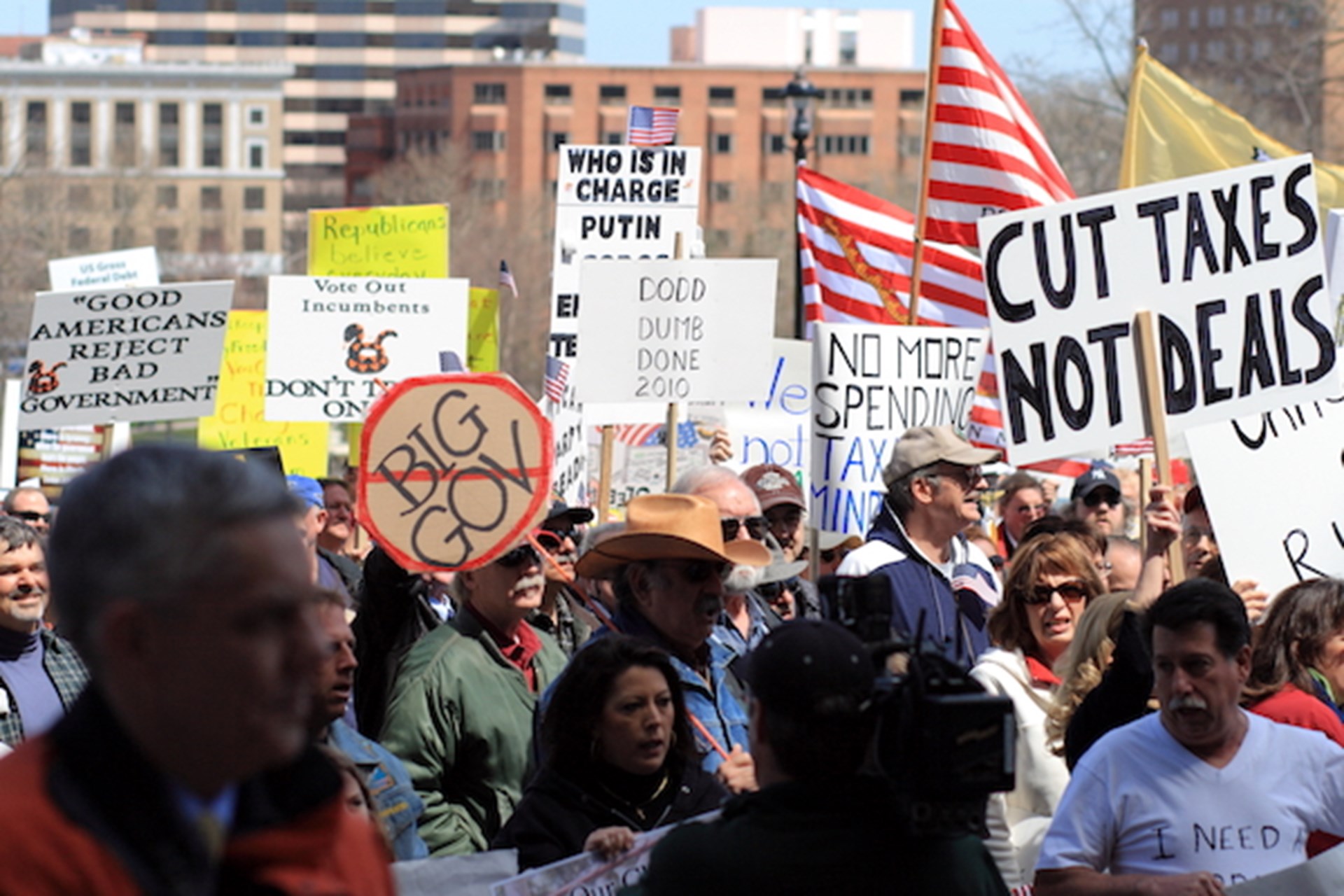 “People are tired of the nanny state and the growth of government, tired of having our money basically robbed,” said a demonstrator at a Tea Party rally in 2009. “[We] want to return to constitutional form of government, limited government that allows people to be free and independent.”

“I think it’s only a matter of time before these people quit carrying signs and start doing something else,” said Ed McQueen, an Ohio resident who attended a rally in Chicago. “What that is, I don’t know. Quit paying taxes? Are they going to start carrying sticks and clubs? I don’t know.”

A decade later, now we know what it is they’d do as an act of rebellion: support Donald Trump.

A recent analysis by Pew Research finds that Republicans who had positive views of the Tea Party movement in 2014 or 2015 were among Trump’s most enthusiastic backers during the 2016 campaign, and continued to have very positive feelings about the president through his first year in office.

In one sense this might be surprising. Imagine traveling back to a Tea Party rally in March 2009 and telling the people like Mr. McQueen—people protesting Democrats, high taxes, stimulus spending, and Troubled Asset Relief Program (TARP)—that in a decade their favorite politician/president would be a man who was (right then, in 2009) a registered Democrat who supported Hillary Clinton, donated to Chuck Schumer, and endorsed TARP, and who would (in the future, as a Republican president) propose more stimulus spending than Obama and impose the largest tax hike in post-World War II history. They would have thought you were slandering them and their movement as hypocrites.

But in another sense, it’s not surprising at all. For the Tea Party “movement” was never a movement in the sense of being motivated by a clear set of issues and principles. This was clear to political observers less than a year after Tea Party protests began.

“Having looked at the swelling of the Tea Party,” said Paul Gottfried in The American Conservative,

I’ve come to the conclusion that it’s not a uniform movement. There are at least three different movements trying to give the impression of being one. The most influential of these movements is the one that fits most easily into the GOP.

And as Matthew Continetti said in The Weekly Standard in June 2010,

There is no single Tea Party. The name is an umbrella that encompasses many different groups. Under this umbrella, you’ll find everyone from the woolly fringe to Ron Paul supporters, from Americans for Prosperity to religious conservatives, independents, and citizens who never have been active in politics before. The umbrella is gigantic.

Indeed, the main faction of the Tea Party was merely a subset of the religious right. A Quinnipiac University poll in 2010 asked basic demographic information, revealing that 20 percent of white evangelicals considered themselves part of the Tea Party movement. Another survey showed that nearly half (47 percent) of those affiliated with the Tea Party considered themselves to be part of the conservative Christian movement. And despite the perception of the movement being comprised of economically oriented libertarians, the most commonly held views were not economic but social. For example, nearly two-thirds (63 percent) of Tea Partiers said abortion should be illegal in all or most cases, and only eighteen percent supported same-sex marriage.

Fifty-five percent of people who say they are part of the Tea Party agreed that, “America has always been and is currently a Christian nation.”

Yet despite being dominated by religious people, the Tea Party organizations never focused on social conservative issues. There was, in fact, little agreement on which issues were significant. When the Washington Post contacted 647 Tea Party groups in 2010, they found that less than half of the organizations considered spending and limiting the size of government to be a primary concern. (Today, as Tea Party organizations have been taken over by populist grifters, then number who would prioritize fiscal conservatism is likely to be even smaller.)

So if the Tea Party is not a principled movement, what was it? Mostly a marketing tactic—an attempt at rebranding the GOP. The term Tea Party was mainly a label for populist Republicans and independents who always vote for the GOP, even when they shun the Republican label. Using the Tea Party label was a way to set themselves apart from the despised ruling class and others they considered RINOs (Republicans in Name Only).

It’s true that during the presidency of George W. Bush the conservative brand became almost meaningless. Even the so-called conservative media used the label, without irony, to refer to politicians who supported increases in government spending (Bush), amnesty for illegal aliens (John McCain), government-sponsored universal health care (Mitt Romney), and abortion and gay marriage (Rudy Giuliani). When “conservatives” could embrace the core of the liberal agenda, what did the term mean?

The original Tea Party events in 2009 provided a way for frustrated Republican populists to answer that question, however vaguely, by declaring we are this and not that. What many wanted was not full-spectrum conservatism, but a more Republican form of progressivism.

Eventually, the GOP establishment realized that tapping into the Tea Party’s energy would help them take back Congress. The New York Times identified 138 candidates for Congress with significant Tea Party support in the 2010 mid-term elections. Out of that group, 50 percent were elected to the Senate and 31 percent to the House. One of those candidates was Justin Amash, a self-described Hayekian libertarian who explained his approach to voting on legislation, by saying,

I follow a set of principles. I follow the Constitution. And that’s what I base my votes on. Limited government, economic freedom, and individual liberty.

In 2011 Amash found the Liberty Caucus, a group in the House of Representatives that consisted of Tea Party conservatives and libertarians. This month, Amash had to resign as chairman of the caucus he founded. The reason: he supports the impeachment of Trump.