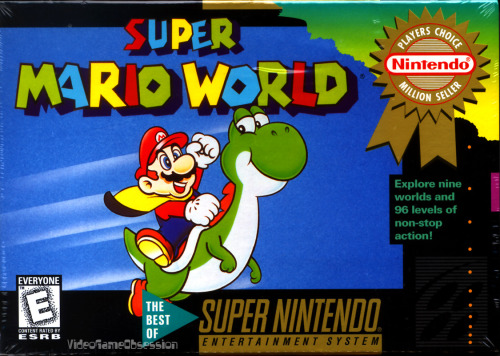 Though the SNES was a 16 bit system, it proved to be a more capable than Genesis with greater memory space, more colors, more graphical effects and most notably, better sound. At launch there were several games that were intended to show off the graphical capabilities such as F-Zero but the one that insured strong initial sales was the pack in title: Super Mario World. The game won critical acclaim, sold over 20 Million Copies and proved that Mario still had some life in him following what many considered to be the perfection of the series.

Super Mario World was included as the pack-in game when the Super Nintendo was released in 1991. No doubt this helped system sales in the early days. Super Mario World didn’t offer a lot that was completely new from SMB 3 but the graphics and sound were improved considerably and the game just had a more polished feel to it. It also did have a few changes that affected gameplay such as the introduction of Yoshi and some pseudo-3D effects. To me it really represents the perfection of the SMB series and the side-scrolling platform game in general. As much as possible anyway…

Super Mario World has sold over 20-million copies and has been re-released a number of times. It was included as part of the Super Mario All-Stars on the Super NES in 1994, on the Game Boy Advance as Super Mario Advance 2 in 2001 and it was also re-released as a Virtual Console title on the Wii, Wii U and Nintendo 3DS so there’s no excuse for you not to play this game.