Occupational Licensing is a Scam

Occupational Licensing is a Scam

What word best describes the actions of government? Would it be greed? How about thuggery? Or cronyism?

Writing for Reason, Eric Boehm has a story showing that “all of the above” may be the right answer.

But I Am an Engineer

At first it seems like a story about government greed.

When Mats Järlström’s wife got snagged by one of Oregon’s red light cameras in 2013, he challenged the ticket by questioning the timing of the yellow lights at intersections where cameras had been installed. Since then, his research into red light cameras has earned him attention in local and national media – in 2014, he presented his evidence on an episode of “60 Minutes”…on how too-short yellow lights were making money for the state by putting the public’s safety at risk.”

But then it became a story about government thuggery.

…the Oregon State Board of Examiners for Engineering and Land Surveying…threatened him. Citing state laws that make it illegal to practice engineering without a license, the board told Järlström that even calling himself an “electronics engineer” and the use of the phrase “I am an engineer” in his letter were enough to “create violations.” Apparently the threats weren’t enough, because the board follow-up in January of this year by officially fining Järlström $500 for the supposed crime of “practicing engineering without being registered.”

Gasp, imagine the horror of having unregistered engineers roaming the state! Though one imagines that the government’s real goal is to punish Järlström for threatening its red-light revenue racket.

But if you continue reading the story, it’s also about cronyism. The Board apparently wants to stifle competition, even if it means trying to prevent people from making true statements.

Järlström is…arguing that it’s unconstitutional to prevent someone from doing math without the government’s permission. …The notion that it’s somehow illegal for Järlström to call himself an engineer is absurd. He has a degree in electrical engineering from Sweden… it’s not the first time the Oregon State Board of Examiners for Engineering and Land Surveying has been overly aggressive…the state board investigated Portland City Commissioner Dan Saltzman in 2014 for publishing a campaign pamphlet that mentioned Saltzman’s background as an “environmental engineer.” Saltzman has a bachelor’s degree in environmental and civil engineering from Cornell University, a master’s degree from MIT’s School of Civil Engineering, and is a membership of the American Society of Civil Engineers.”

In other words, this is yet another example of how politicians and special interests use “occupational licensing” as a scam. 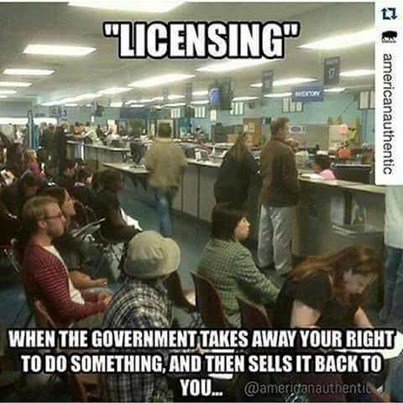 The politicians get to impose “fees” in exchange for letting people practice a profession.

And the interest groups get to impose barriers that limit competition.

A win-win situation, at least if you’re not a taxpayer or consumer.

Or a poor person who wants to get a job.

Some of the examples of occupational licensing would be funny if it wasn’t for the fact that people are being denied the right to engage in voluntary exchange.

Such as barriers against people who want to help deaf people communicate.

If you want to help a deaf person communicate in Wisconsin, you’ll have to get permission from the state government first. Wisconsin is one of a handful of states to require a license for sign language interpreters, and the state also issues licenses for interior designers, bartenders, and dieticians despite no clear evidence that any of those professions constitute a risk to public health in other states without similar licensing rules. …It’s hard to imagine any health and safety benefits to mandatory licensing for sign language interpreters, which is one of eight licenses highlighted in a new report from Wisconsin Institute of Law and Liberty, a conservative group. …Since 1996, the number of licensed professions in the Badger State has grown from 90 to 166 – an increase of 84 percent, according to the report. Licensing cost Wisconsin more than 30,000 jobs over the last 20 years and adds an additional $1.9 billion annually in consumer costs.”

Or restricting the economic liberty of dog walkers.

…according to the Colorado government, people who watch pets for money are breaking the law unless if they can get licensed as a commercial kennel – a requirement that is costly and unrealistic for people working out of their homes, often as a side job. This is not simply a case of an outdated law failing to accommodate modern technology. There are more nefarious motives – those of special interests who want to protect their profits by keeping out new competition. …it is time to add “Big Kennel” to the list of special interests that support ridiculous occupational licensing schemes.”

Or trying to deny rights, as in the case of horse masseuses.

The Risk of Rogue Interior Designers

The good news is that there’s a growing campaign to get rid of these disgusting restrictions of voluntary exchange.

The acting head of the Federal Trade Commission is getting involved. On the right side of the issue!

Maureen K. Ohlhausen, the new acting chair of the Federal Trade Commission, thinks it’s high time that the FTC start giving more than lip service to its traditional mandate of fostering economic liberty. And the first item in her crosshairs is the burgeoning growth in occupational licenses. Over the past several decades, licensing requirements have multiplied like rabbits, she noted. Only 5 percent of the workforce needed a license in 1950, but somewhere between one-quarter and one-third of all American workers need one today. …depending on where you live, you might need a license to be an auctioneer, interior designer, makeup artist, hair braider, potato shipper, massage therapist or manicurist. “The health and safety arguments about why these occupations need to be licensed range from dubious to ridiculous,” Ohlhausen said. “I challenge anyone to explain why the state has a legitimate interest in protecting the public from rogue interior designers carpet-bombing living rooms with ugly throw pillows.”

Hooray for Ms. Ohlhausen. She’s directing the FTC to do something productive, which is a nice change of pace for a bureaucracy that has been infamous in past years for absurd enforcement of counterproductive antitrust laws.

A column in the Wall Street Journal highlights Mississippi’s reforms.

State lawmakers in Mississippi are taking the need for reform to heart. Two weeks ago Gov. Phil Bryant signed into law H.B. 1425, which will significantly rein in licensing boards. …H.B. 1425 explicitly endorses competition and says that the state’s policy is to “use the least restrictive regulation necessary to protect consumers from present, significant and substantiated harms.” Under the law, the governor, the secretary of state, and the attorney general must review and approve all new regulations from professional licensing boards to ensure compliance with the new legal standard. This should be a model for other states. …Mississippi’s law…covers all licensing boards controlled by industry participants, spells out a pro-competition test, and requires new rules to be approved by elected officials accountable to voters. Mississippi has smartly targeted the core problem: Anticompetitive regulations harm the economy, slow job growth, and raise consumer prices.”

Here’s some of the national data in the WSJ column. 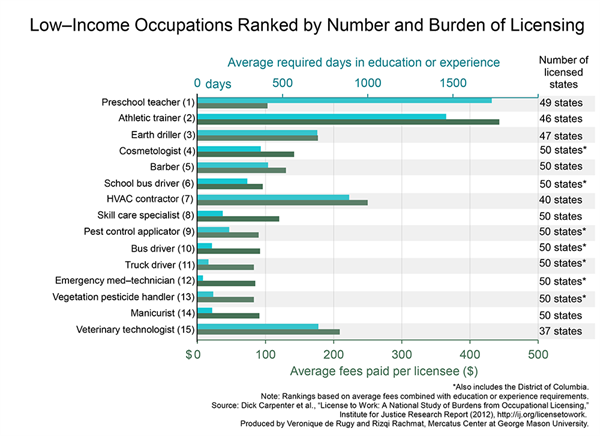 Keep in mind, as you read these numbers, that poor people disproportionately suffer as a result of these regulatory barriers to work.

In the 1950s only about 1 in 20 American workers needed a license, but now roughly 1 in 4 do. This puts a real burden on the economy. A 2012 study by the Institute for Justice examined 102 low-income and middle-income occupations. The average license cost $209 and required nine months of training and one state exam. …Even the Obama administration saw the problem. A 2015 report from the White House said that licensing can “reduce employment opportunities and lower wages for excluded workers.” In 2011 three academic economists estimated that these barriers have result in 2.85 million fewer jobs nationwide, while costing consumers $203 billion a year thanks to decreased competition.”

Professor Tyler Cowen explains in Time that licensing laws explain in part the worrisome decline in mobility in America.

Some of the decline in labor mobility may stem from…the growth of occupational licensure. While once only doctors and medical professionals required licenses to practice, now it is barbers, interior decorators, electricians, and yoga trainers. More and more of these licensing restrictions are added on, but few are ever taken away, in part because the already licensed established professionals lobby for the continuation of the restrictions. In such a world, it is harder to move into a new state and, without preparation and a good deal of investment, set up a new business in a licensed area.”

Last but not least, we have a candidate for the Bureaucrat Hall of Fame. Elizabeth Nolan Brown explains for Reason that a paper pusher in Florida managed to use occupational licensing fees as a tool of self-enrichment.

In Palm Beach County, Florida, all topless dancers are required to register with county officials and obtain an Adult Entertainment Work Identification Card (AEIC), at the cost of $75 per year. The regulation is ridiculous for a lot of reasons, but at least applicants – many of whom are paid exclusively in cash – were able to pay the government-ID fee with cash, too, making things a little more convenient and a little less privacy-invading. But not anymore, thanks to the alleged actions of one sticky-fingered government employee. …Pedemy “diverted” at least $28,875 (and possibly an additional $3,305) from county coffers between October 2013 and mid-November 2016. The money came from both adult-entertainer fees – approximately 70 percent of which were paid in cash – and court-ordered payments intended for a crime Victims Services Fund.”