Tax Avoidance Is an American Tradition 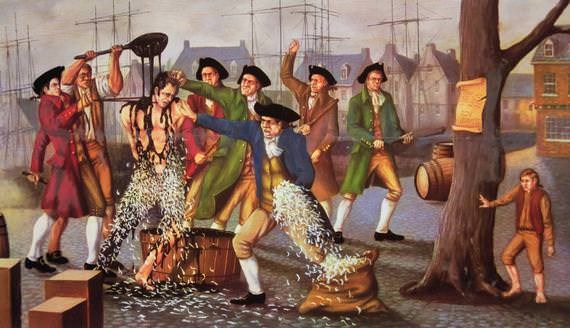 Tax Avoidance Is an American Tradition

Thanksgiving approaches, and our colleagues on the left (and some on the right), continue their prolonged apoplectic seizure over Donald Trump’s non-taxpaying ways. The record cries out to be set straight. Tax avoidance is as great an American tradition as eating turkey and pumpkin pie on a particular Thursday in November. Actually, it goes back a little bit farther than our culinary peculiarities.

Today…our rebelliousness is surprisingly, and relative to our ancestors’, embarrassingly mild.

When then-presidential candidate Trump rebutted the attacks on his tax status during the presidential debates by merely saying, “that makes me smart,” every American citizen, despite their views on his perhaps questionable economic policies, should have met him with applause. One wonders how the schoolbook mentions of “taxation without representation,” are so easily forgotten, or why they are never applied to the IRS, a vehicle that makes regulations governing taxation without the representation of the people. Then one realizes that tax-financed schools are unlikely to criticize taxes. Dear reader, you are entitled to some plain speech.

Throughout western civilization following the collapse of Rome, mankind recognized quite clearly the evils of taxation. When a government went outside the limits that the requirements of the rights of men imposed upon it, there was powerful public uproar. As noted by Charles Adams in his history of taxes, “Today…our rebelliousness is surprisingly, and relative to our ancestors’, embarrassingly mild. We have great fear of the taxman – our ancestors had malice aforethought.”

Among the non-English speaking states, there were several nations practically forged out of disdain for taxes. The German peasant’s war (the linked account is one of the few times Engels got anything right, and then he proceeds to draw fallacious conclusions) that practically depopulated the Holy Roman Empire was a scream against an economically oppressive, politically entrenched ruling class. The Dutch Republic came out of a rebellion against aggressive excise taxation, and went on to establish a great commercial power based off smuggling to avoid protectionist policies.

Englishmen themselves had a long tradition of resistance to government requisitions. As far back as 1215, King John found himself forced by the nobility of England to sign the Magna Carta; recognizing the principle that English wealth should not, and would not be used to finance wars on foreign soil.

The unhappy subjects picked up a trick from the Dutch – smuggling.

Later in history, King Charles I quite literally lost his head because of his repeated attempts to extort taxes out of the English Parliament. Parliaments of that time remembered that they were founded to check the judicial power of the monarchy. They held the keys to the purse of the nation, and therefore they upheld just rule against the whims of a single man.

The American War for Independence

As people long accustomed to holding such power are want to do, this shortly changed. Because of the Glorious Revolution of 1688, the Parliament asserted its supremacy over the monarchy once and for all, but its thirst could hardly be slaked by that enormous conquest.

They supported the involvement of the British crown in the Seven Years War, and to pay for it, they asserted unfounded authority over the crown colonies in North America, a jurisdiction accustomed to local self government, and therefore unaccustomed to taxation for the benefit of speculative interests maintained by an aristocracy separated from the tax payer by an entire ocean.

Finally, the freedom-loving Englishmen inhabiting these crown colonies saw fit, after appeal to every other recourse the law gave them, to separate themselves from such tyrannical rule and establish a country devoted to the idea that free men ought to be able to enter into commerce freely. As they said:

“The history of the present King of Great Britain is a history of repeated injuries and usurpations, all having in direct object the establishment of an absolute Tyranny over these States. To prove this, let Facts be submitted to a candid world … He has combined with others to subject us to a jurisdiction foreign to our constitution, and unacknowledged by our laws; giving his Assent to their Acts of pretended Legislation … For imposing Taxes on us without our Consent.”

“He has called together legislative bodies at places unusual, uncomfortable, and distant from the depository of their Public Records, for the sole purpose of fatiguing them into compliance with his measures …

One can only hope that more tax avoiders find their way to public office, and replace those that have lived of the public dole ever since graduating high school.

He has dissolved Representative Houses repeatedly, for opposing with manly firmness his invasions on the rights of the people …

He has erected a multitude of New Offices, and sent hither swarms of Officers to harass our people and eat out their substance …

He has kept among us, in times of peace, Standing Armies without the Consent of our legislatures …”

High taxes require massive measures for their enforcement. In the case of King George III, he felt his hand forced by parliament to strip the colonies of their civil liberties and establish martial law over his North American subjects.

The unhappy subjects picked up a trick from the Dutch – smuggling. Modern authors are quick to condemn figures like John Hancock for his “illegal activities,” such as shipping Dutch tea to the colonies without paying duties on it. They forget that the War for Independence was based on the fact that the British government was itself breaking the “laws of nature, and nature’s God.” In this case, the government outlawed the shipping of certain goods, which abrogated the inalienable rights to migration and trade so well defended by an able political theorist of the time, Hugo Grotius. Furthermore, the limited supply of goods now had a tax imposed on it, meaning that the right to property was abridged through licensed theft. All these to pay for a war on foreign soil when the American people paid for their own defense with their own sweat and blood. Hancock was merely exercised his inalienable rights, against which there can be no law.

Later as governor of Massachusetts, he became extraordinarily popular due to his downright refusal to collect confiscatory taxes from the farmers inhabiting the western part of his state. Due to gout, he decided not to stand for office in the period of 1785-87. The newcomer to the position was James Bowdoin, who ought to have been considered unfit to serve because he held an interest in thousands of depreciated Continental notes. Meaning, of course, that he had an acute interest in insuring that his depreciated currency was backed by government credit. Which is difficult to achieve when a bunch of pesky citizens are refusing to pay their taxes. Thus, the impetus for Shay’s rebellion was born.

If we are measuring American patriotism by the standard of freedom so clearly practiced by the founding generation, then one can only hope that more tax avoiders find their way to public office, and replace those that have lived of the public dole ever since graduating high school. Trump merely used legal loopholes to avoid the burden of licensed theft, and the same benefit of the law ought to extend to every person contracting business in the United States.

William Seabolt is a classical liberal (but his friends think he might just be a contrarian). He has been published in American Thinker.

📂This entry was posted in News and Politics 📎and tagged taxes

One Response to Tax Avoidance Is an American Tradition