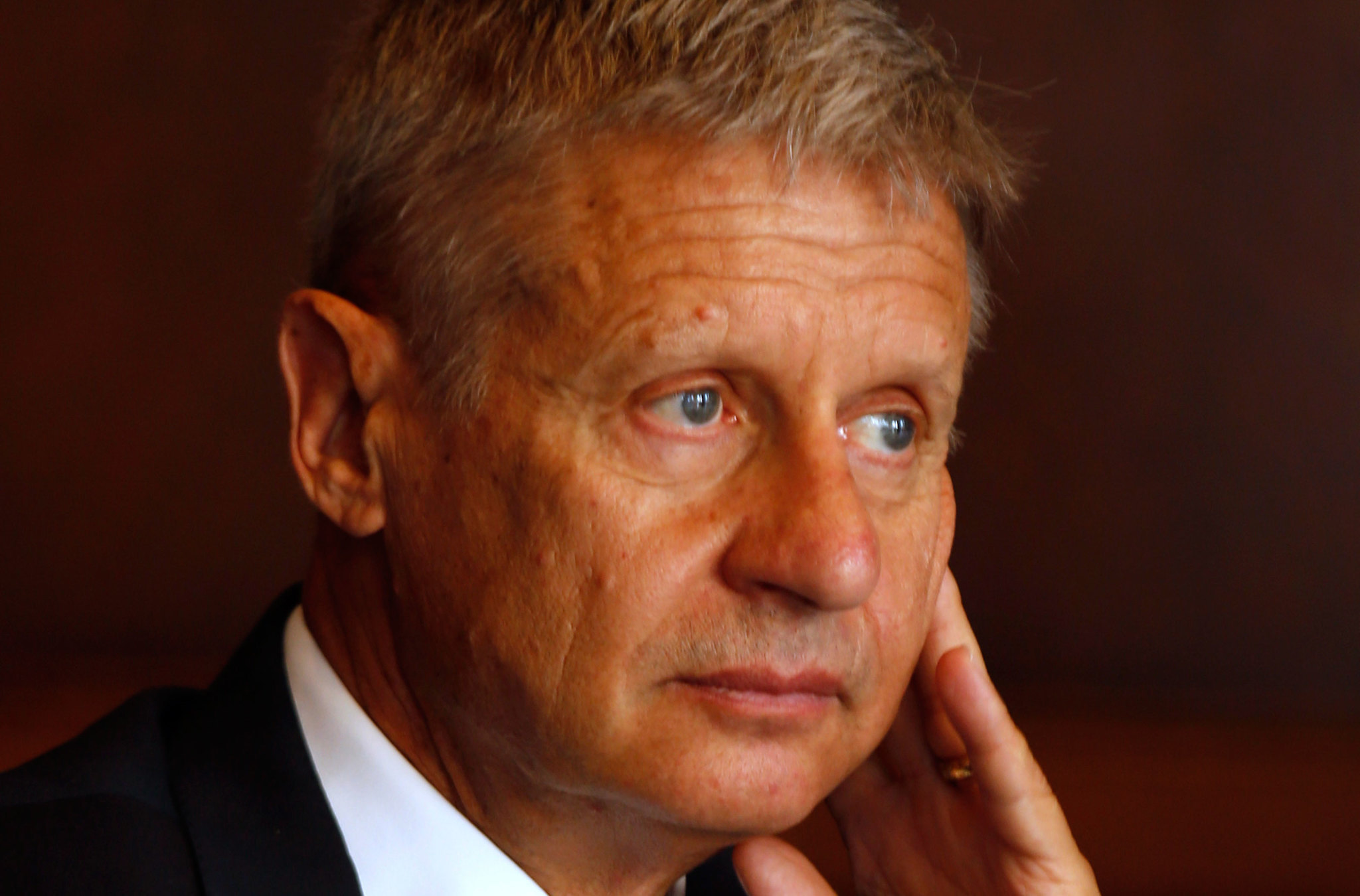 As Nov. 8 looms, a dismayed, disconsolate America waits and wonders: What is it about 2016?

How has our country fallen so inescapably into political and policy gridlock? How did pandering to aggrieved niche groups and seducing blocs of angry voters replace working toward solutions as the coin of our governing class? How could the Democratic and Republican parties stagger so far from this nation’s political mainstream?

And the most pressing question: What should tens of millions of voters who yearn for answers do with two major-party candidates they disdain? Polls show an unprecedented number of people saying they wish they had another choice.

The Republicans have nominated Donald Trump, a man not fit to be president of the United States. We first wrote on March 10 that we would not, could not, endorse him. And in the intervening six-plus months he has splendidly reinforced our verdict: Trump has gone out of his way to anger world leaders, giant swaths of the American public, and people of other lands who aspire to immigrate here legally. He has neither the character nor the prudent disposition for the job.

The mystery and shame of Trump’s rise — we have red, white and blue coffee mugs that are more genuinely Republican — is the party’s inability or unwillingness to repulse his hostile takeover. We appreciate the disgust for failed career politicians that Trump’s supporters invoke; many of those voters are doubly victimized — by economic forces beyond their control, and by the scorn of mocking elitists who look down their noses to see them. He has ridden to the White House gate on the backs of Americans who believe they’ve been robbed of opportunity and respect. But inaugurating a bombastic and self-aggrandizing President Donald Trump isn’t the cure.

The Democrats have nominated Hillary Clinton

Clinton’s vision of ever-expanding government is in such denial of our national debt crisis as to be fanciful. Rather than run as a practical-minded Democrat as in 2008, this year she lurched left, pandering to match the Free Stuff agenda of then-rival Bernie Sanders. She has positioned herself so far to the left on spending that her presidency would extend the political schism that has divided America for some 24 years. That is, since the middle of a relatively moderate Clinton presidency. Today’s Hillary Clinton, unlike yesteryear’s, renounces many of Bill Clinton’s priorities — freer trade, spending discipline, light regulation and private sector growth to generate jobs and tax revenues.

Hillary Clinton calls for a vast expansion of federal spending, supported by the kinds of tax hikes that were comically impossible even in the years when President Barack Obama’s fellow Democrats dominated both houses of Congress. The nonpartisan Committee for a Responsible Federal Budget calculates that Clinton’s plan would increase spending by $1.65 trillion over a decade, mostly for college education, paid family leave, infrastructure and health-related expenditures. Spending just on debt interest would rise by $50 billion. Personal and business taxation would rise by $1.5 trillion. Sort through all the details and her plan would raise the national debt by $200 billion.

That is but one of the reasons why so many Americans reject Clinton: They don’t trust what she says, how she makes decisions, and her up-to-the-present history of egregiously erasing the truth:

In the wake of a deadly attack on American personnel in Libya, she steered the American public away from the real cause — an inconvenient terror attack right before the 2012 election — after privately emailing the truth to her daughter. The head of the FBI, while delivering an indictment minus the grand jury paperwork, labeled her “extremely careless” for mishandling emails sensitive to national security. In public she stonewalled, dissembled and repeatedly lied — several were astonishing whoppers — about her private communications system (“There is no classified material,” “Everything I did was permitted,” and on and on). Her negligence in enforcing conflict-of-interest boundaries allowed her family’s foundation to exploit the U.S. Department of State as a favor factory. Even her command and control of a routine medical issue devolved into a secretive, misleading mission to hide information from Americans.

Time upon time, Clinton’s behavior affirms the perception that she’s a corner-cutter whose ambitions drive her decisions. One telling episode among the countless: Asked by a voter if she was for or against the Keystone XL pipeline from Canada, she replied, “If it’s undecided when I become president, I will answer your question.” As we’ve asked here before, will Hillary Clinton ever get over her consuming fear of straight talk?

Taken together, Trump and Clinton have serious flaws that prevent us from offering our support to either of them. Still, come Nov. 8, tens of millions of Americans with make a draw that they consider beyond distasteful.

We choose not to do that. We would rather recommend a principled candidate for president — regardless of his or her prospects for victory — than suggest that voters cast ballots for such disappointing major-party candidates.

With that demand for a principled president paramount, we turn to the candidate we can recommend. One party has two moderate Republicans — veteran governors who successfully led Democratic states — atop its ticket. Libertarians Gary Johnson of New Mexico and running mate William Weld of Massachusetts are agile, practical and, unlike the major-party candidates, experienced at managing governments. They offer an agenda that appeals not only to the Tribune’s principles but to those of the many Americans who say they are socially tolerant but fiscally responsible. “Most people are Libertarian,” Johnson told the Tribune Editorial Board when he and Weld met with us in July. “It’s just that they don’t know it.”

Theirs is small-L libertarianism, built on individual freedom and convinced that, at both ends of Pennsylvania Avenue, official Washington is clumsy, expensive and demonstrably unable to solve this nation’s problems. They speak of reunifying an America now balkanized into identity and economic groups — and of avoiding their opponents’ bullying behavior and sanctimonious lectures. Johnson and Weld are even-keeled — provided they aren’t discussing the injustice of trapping young black children in this nation’s worst-performing schools. On that and other galling injustices, they’re animated.

We reject the cliche that a citizen who chooses a principled third-party candidate is squandering his or her vote. Look at the number of fed-up Americans telling pollsters they clamor for alternatives to Trump and Clinton.

We offer this endorsement to encourage voters who want to feel comfortable with their choice. Who want to vote for someone they can admire.

Johnson, who built a construction business before entering politics, speaks in terms that appeal to many among us: Expanded global trade and resulting job expansion. Robust economic growth, rather than ever-higher taxation, to raise government revenue. A smaller, and less costly, federal government. Faith in Americans’ ability to parlay economic opportunity into success.

But unless the United States tames a national debt that’s rapidly approaching $20 trillion-with-a-T, Americans face ever tighter constrictions on what this country can afford, at home or overseas. Clinton and Trump are too cowardly even to whisper about entitlement reforms that each of them knows are imperative. Johnson? He wants to raise the retirement age and apply a means test on benefits to the wealthiest.

What’s more, principled third-party candidates can make big contributions even when they lose. In 1992 businessman H. Ross Perot won 19 percent of the popular vote on a thin but sensible platform, much of it constructed around reducing federal deficits. That strong showing by Perot the relative centrist influenced how President Bill Clinton would govern.

We wish the two major parties had not run away from today’s centrist Americans. Just as we wish either of their candidates evoked the principles that a Chicago Tribune now in its 170th year espouses, among them high integrity, free markets, personal responsibility and a limited role for government in the lives of the governed. We hope Johnson does well enough that Republicans and Democrats get the message — and that his ideas make progress over time.

This year neither major party presents a good option. So the Chicago Tribune today endorses Libertarian Gary Johnson for president of the United States. Every American who casts a vote for him is standing for principles — and can be proud of that vote. Yes, proud of a candidate in 2016.