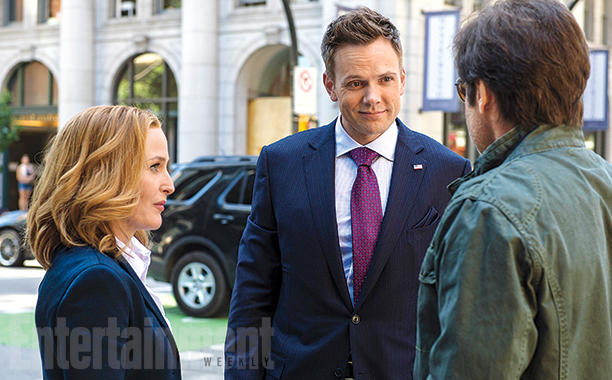 Fox’s upcoming and eagerly awaited revival of The X-Files is updating its conspiracy theories — only this time, the sci-fi series might cause more controversy than when the show told tales of government-aided UFO cover-ups during its initial 1990s run.

In the first return episode screened for reporters (trailer below), paranormal investigators Mulder (David Duchovny) and Scully (Gillian Anderson) team up with a charming web-series host named Tad O’Malley (played by the usually comedic Joel McHale, here in a dramatic role). The character, loosely based on conservative online personalities Alex Jones and Glenn Beck, bashes the “liberal media” in the episode; at one point, Mulder compares O’Malley to Fox News host Bill O’Reilly (“What Bill O’Reilly knows about the truth can fill an eyedropper,” O’Malley retorts).

Now we don’t want to reveal too much about the episode, or how the conspiracy relates to the show’s existing labyrinthine mythology. What we will report – and stop reading if you don’t want to know anything about the first hour – is that O’Malley eventually sways Mulder and Scully to adopt a new conspiracy that lays a framework for the six-episode revival. The theory involves global warming, war in the Middle East, NSA spying, chem-trails (here called “aerial contaminants”), police militarization, supposed FEMA prison camps, and the eventual military “takeover of America” by a UN-like group of “multinational elites.” The conspiracy theory plays a bit like Oliver Stone during his JFK fever pitch — only if his source material was Infowars instead of UFO lore.

“We live in a CitizenFour world now,” says creator Chris Carter, referring to the documentary on NSA leaker Edward Snowden. “We’ve given up certain rights and freedoms because we want the government to protect us after 9/11. We see the admitted spying by the government. These are not things we’re making up and it informs everything Mulder and Scully and doing are doing.”

Carter describes himself as a “mostly interested observer” in the conspiracy world, and notes he researched the new show by combing through conspiracy websites and attending a conspiracy convention.

“I’ve kept my finger to the wind and trying to figure out what’s relevant and possible credible,” Carter says. “People know the show deals with science and fact and also deals with far-flung theories about not only the supernatural but government conspiracies. It throws out as many questions as it does answers. And I have to say what it’s done for me and the writers it has given us a whole new open field which to run. It’s given the show an interesting new life and context that it might not have had in 2002.”

The U.N. takeover threat, however, is something Carter suggests is credible. “The idea of a New World Order is relevant,” Carter says. When we suggest the show is embracing “right-wing” theories, Carter counters, “It’s not necessarily. I don’t see Alex Jones as right-wing, I see him as libertarian … [and O’Malley is] a character who casts everything in doubt.”

The most eyebrow-raising moment in the premiere is when O’Malley brings the 9/11 terrorist attacks into his conspiracy framework. “9/11 was a false flag operation,” O’Malley declares on his Truth Squad with Tad O’Malley show, echoing on Infowars theory. “It’s all part of a conspiracy dating back to the UFO crash at Roswell.” The clip is presented early in the episode. Later, Mulder and Scully embrace O’Malley’s overall position, though the 9/11 element isn’t referenced.

“So here’s the thing,” Carter says when we asked about the “false flag” line. “Chris Carter doesn’t believe that. Chris Carter is very open minded about these things. But the character O’Malley believes it. And he convinces Mulder to – not necessarily believe that – but to believe many other things he’s exposing. I don’t think Mulder and Scully adopt any political position so much as a new approach in their search for the truth. While I think their politics are balanced, I think the turn they take is toward a more heretical political position.”