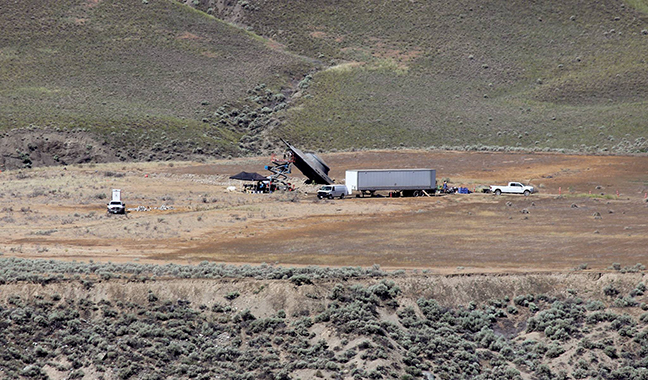 Gareth Smart, a part-time acting coach in Cache Creek, provided a big treat — and potential spoiler — to X-Files fans around the world on Wednesday when he shared photos of an alien crash site on Facebook.

While a Vancouver crew for the upcoming X-Files miniseries has been busy shooting street scenes involving actors David Duchovny (Fox Mulder) and Gillian Anderson (Dana Scully), another crew has apparently been shooting night scenes in Ashcroft, an hour west of Kamloops.

The set features a flying saucer embedded in the ground.

Ashcroft, with its semi-desert terrain, may be standing in for Roswell, New Mexico, a supposed UFO crash site that is a big part of the X-Files mythology.

“Ashcroft has the Wilderness Way Resort zipline park and they are filming right on their land. The X-File crew is staying at their resort,” said Smart. “It’s my understanding that they are filming a whole whack of stuff at night.”

📂This entry was posted in Science Fiction <a href="http://www.megalextoria.com/wordpress/index.php/category/science-fiction/x-fi