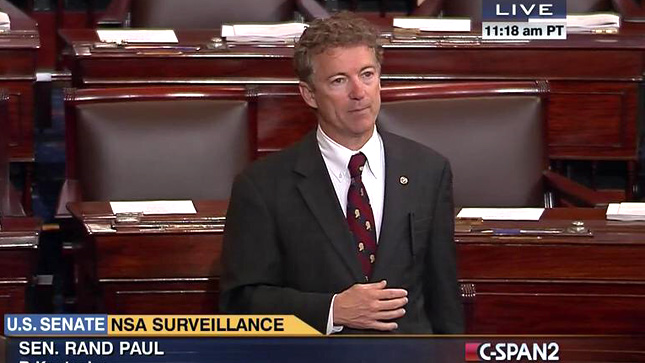 The Senate’s frenzied efforts to finish work on controversial trade and national security legislation are being complicated by a Rand Paul filibuster launched Wednesday.

Sen. Paul’s (R-Ky.) filibuster hampers the GOP-led Senate’s efforts to pass the big-ticket items before the Memorial Day recess. The new twist in this week’s Senate deliberations is a huge test for Majority Leader Mitch McConnell (R-Ky.), who is a Paul ally.

Paul, who is running for the GOP presidential nomination, began speaking on the Senate floor against the National Security Agency’s surveillance programs in the middle of a debate over fast-track trade legislation.
Paul’s move will require McConnell to get a series of unanimous-consent agreements if he is to stick to his timeline of passing fast-track and an extension of the Patriot Act this week. Any one senator can block such an agreement, and there are many who feel strongly about trade and the nation’s spying powers. Senate officials say there is a chance proceedings could extend well into the holiday weekend.

Aides say fast-track and a short-term extension of surveillance authority likely have the votes to pass the upper chamber. But the Senate might not have enough time to get the bills done over the next couple of days.

Furthermore, key provisions of the Patriot Act expire June 1, and lawmakers are not scheduled to return to Washington before then. The House, meanwhile, is expected to leave town Thursday.

House GOP leaders note they have passed an NSA reform bill, which is backed by most congressional Democrats and President Obama. McConnell and other Senate Republicans strongly oppose it.

Senate Democrats, who have been extremely divided over trade this month, have shifted strategies. Instead of focusing on fast-track, they are now talking much more about NSA reform — which has pitted Speaker John Boehner (R-Ohio) against McConnell.

Sen. Dianne Feinstein (D-Calif.), who often serves as a bellwether of the Democratic caucus, said she planned to vote in favor of advancing fast-track on Thursday. Democrats who oppose the trade bill acknowledge it has the votes to pass eventually.

But senators will have to decide whether they want to spend the recess in the Capitol instead of barbecuing or attending parades in their home states.

On Wednesday, McConnell told reporters he planned to “grind” ahead. He told his colleagues tha