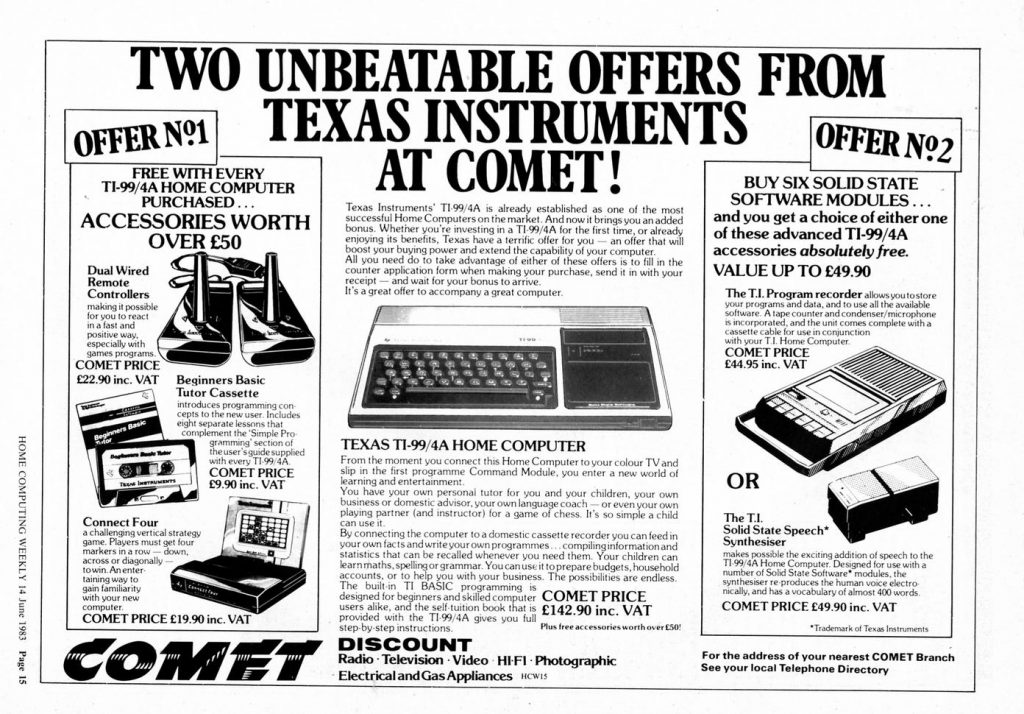 I’m not sure what the popularity of the TI-99/4A in the U.K was (my guess is not very) but that is where the above ad is from. Here in the U.S., it had a very brief period of popularity. This ad appeared in the June 14-22, 1983 issue of Home Computer Weekly. By this time, Texas Instruments had pretty much already lost the price war with Commodore and the TI-99/4A would be officially discontinued the following year.

The TI-99/4A was an early home computer designed by Texas Instruments. It was introduced in 1981 and competed with the Apple II, Atari 8-bit computers, VIC-20 and later the Commodore 64. It was technically the first 16-bit personal computer (the processor was a TMS9900) but this provided limited benefits as the 16-bit processor was basically shoehorned into a system that had originally been designed for an 8-bit processor that TI failed to successfully produce. The TI-99/4A was superior to the VIC-20 in many ways but it could not compete on price. Commodore manufactured its own chips giving it a cost advantage. A little more than a year after the TI/99-4A was introduced, the Commodore 64 was released, which while arguably having a weaker CPU, had much better sound and graphics capabilities. The TI/99-4A did have a brief period of popularity and had up to a 35% market share for a short amount of time.

Texas Instruments was one of several victims of the price wars initiated by Commodore and the TI/99-4A was discontinued in 1984. Their marketing strategy was pretty poor and having Bill Cosby as a spokesman could only help so much. To compete, their plan was to sell th