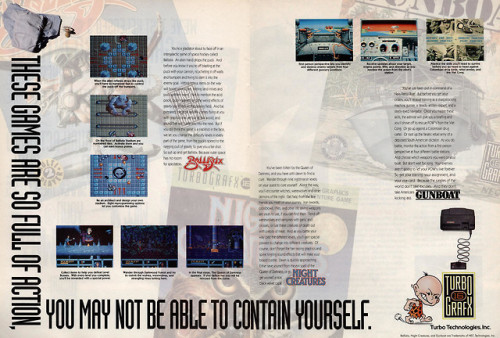 In 1992, around the time that the Turbo Duo was released, TTI took over marketing of the TurboGrafx systems and software. Unfortunately, they did little to improve sales. Back in 1989 when the TurboGrafx-16 was first released in the U.S., it was thought that it would be a huge hit. The NES was looking dated and there was no other strong competition at the time.

Unfortunately for NEC, Sega released their next gen system around the same time. The TurboGrafx-16 already had a lot of things working against it. The biggest problem was poor third party support due in part to Nintendo’s monopolistic licensing policy (essentially, to have your game licensed for use on the NES then it had to be exclusive to that system). Because the NES was so popular, few companies wanted to give up publishing their game on that system. To make matters worse, NEC and later TTI didn’t make terribly good choices on many of the games they brought over from Japan. In many cases, it was just too much work to localize them (or at least they felt that was the case). The end result was that while there were some very good games for the TurboGrafx-16, there were just too few for that system to complete with the likes of the NES and the Genesis. The Genesis wasn’t as vulnerable to Nintendo’s licensing policies because Sega had so many of their own games to fall back on and established relationships with more 3rd party developers. At any rate, this ad from the May 1992 issue of GamePro was from shortly af