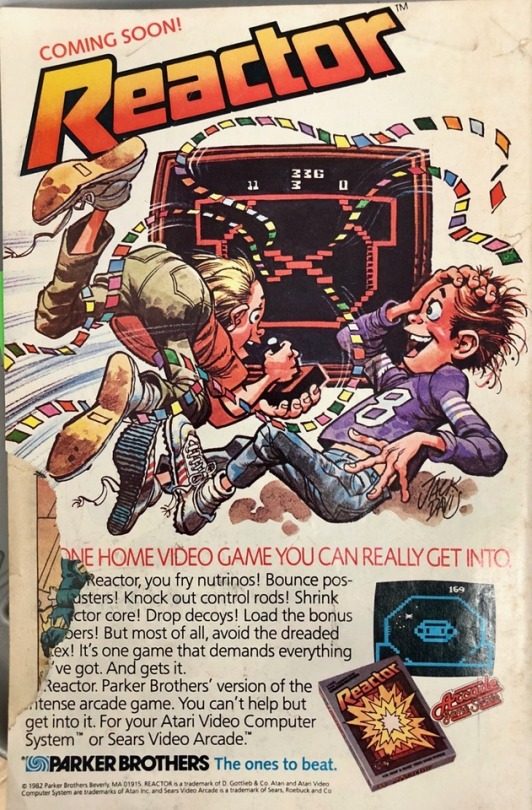 Parker Brothers Reactor game for the Atari 2600 from 1982

Reactor was originally an arcade game by Gottlieb in 1982. However, is was ported to the Atari 2600 and released on that platform by Parker Brothers the same year. The goal of the game is to prevent a nuclear reactor from melting down.

The control scheme of Reactor is rather unique. In the center of the screen is the reactor and it is constantly pulling you towards it as if it were a black whole. There are various “enemy” radioactive particles that are trying to kill you. Touching the particles or the barrier around the reactor is a bad things. However, you can only speed up or slow down as you “orbit” the reactor in order to control your trajectory. You don’t control your movement directly. Particles are affected by the reactor’s pull as well but they try to steer towards you. You have traps that you can set that the particles will target instead. Setting them in the right place can lead to them colliding with the reactor and being destroyed or into the control rods and destroying them which is your ultimate goal.

The relative uniqueness of this game makes it worth trying though it won’t be for everybody. The arcade version has the advantage of using a trackball whereas most Atari 2600 owners were stuck with a joystick. However, a trackball can be used on the Atari 2600 as well. The joystick is not a great substitute and I definitely recommend trying out a trackball even if you play this on an Atari 2600.

I’m not aware of any re-releases of this game and while an Intellivision port was planned, it was never released. If you want to give this game a try then you will either have to resort to emulation (of the arcade game or the 2600 version), or hunt down an original. The Atari 2600 cartridges are not terribly hard to find.