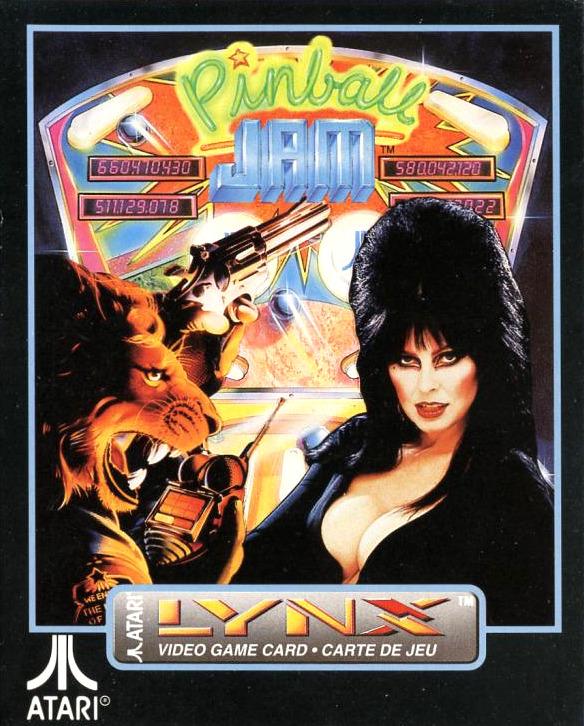 Pinball Jam is an Atari Lynx exclusive that provides digital simulations of two pinball tables: “Elvira and the Party Monsters” by Midway from 1989 and “Police Force” by Williams also from 1989. The Lynx game was released in 1992. Pinball Jam got fairly average reviews so I think it really comes down to rather or not you like this kind of game. Like many games for Atari systems (particularly those done by Atari) at the time (starting with the Atari 7800), it feels a little rushed. The graphics are a bit choppy and it just seems like it could have really been a lot better with a little more polish. Having said that, it is still a decent game. In fact, I would argue there was no other pinball game as good for a mobile platform at that time. Of course, if your minimum standard is Alien Crush on the TurboGrafx-16 then you may be disappointed. The first table is really the one that makes this game worth having. Who doesn’t like an Elvira themed game? In addition to the superior theme, it also has better sound effects and music including the digitized voice of Elvira herself. The second table is slightly simpler. One of the criticisms of this game is that the tables are really too complex for the resolution of the Lynx. I mentioned Alien Crush above and while that game had spectacular graphics, the table layouts were really relatively simple. I think the Lynx could have done a pretty good rendition of that game. Anwyay, despite the slightly simpler layout of “Police Force”, it’s a more boring theme in my opinion. The music and sound effects just aren’t as interesting either. It’s not bad but it isn’t as good as Elvira.

One other complaint I have with this game is the decision they made to scroll the table vs. just switching to another area of the table when the ball went there. While the scrolling is a good demonstration of the abilities of the Lynx, I think it would have been a little easier on the eyes to do it another way.

Despite the negatives, this is a fun pinball game and while it may not be worth buying a Lynx for, it is definitely worth owning if you have a Lynx. Unfortunately, other than emulation, there is no other way to play this game. Interestingly, the Elvira table is currently available via The Pinball Arcade, a downloadable pinball game with a large number of tables available for many platforms. However, as far as I know there is no other digital version of Police Force.