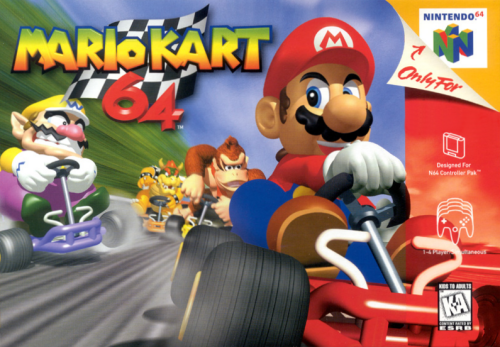 Mario Kart 64 was the second Mario Kart game and perhaps one of the most eagerly anticipated. It was originally scheduled to be a launch title but ended up being released about eight months later in early 1997 instead. While fondly rememberd today for the most part, it had somewhat mixed reviews at the time and was regarded by some as somewhat of a disappointement. There were some pretty major changes from its predecessor (Super Mario Kart on the Super Nintendo). True 3D graphics were used as opposed to sprites and the Mode 7 effects of the SNES. Mario Kart 64 also added four player support which was a nice addition. The Spiny Shell (or Blue Shell as it is more commonly known) also made its debut with Mario Kart 64 and has been a staple ever since. Some of the complaints include that that the game was too easy, there were fewer things to discover (secrets to be found), and there wasn’t enough to set it apart from the original. There was also slow down with more than two players. The so-called “rubberband AI” was also criticized. This is what makes it difficult to separate from the pack and has been a part of Mario Kart games in some form ever since. However, the true strength of this game was multiplayer and that’s really true of all the Mario Kart games. There was also plenty of variety in regards to the number of tracks. Despite whatever imperfections Mario Kart 64 may have had, this is really a must have game for that system. While perhaps not the best game in the series for single player, multi-player is just as fun as any other version. I somehow missed out on Super Mario Kart on the SNES and didn’t have a Nintendo 64 until it was already considered retro. The first Mario Kart I played was Double Dash on the GameCube and it is really still my favorite. I suspect that whichever Mario Kart most people first played is their favorite version. aren’t TOO expensive either.