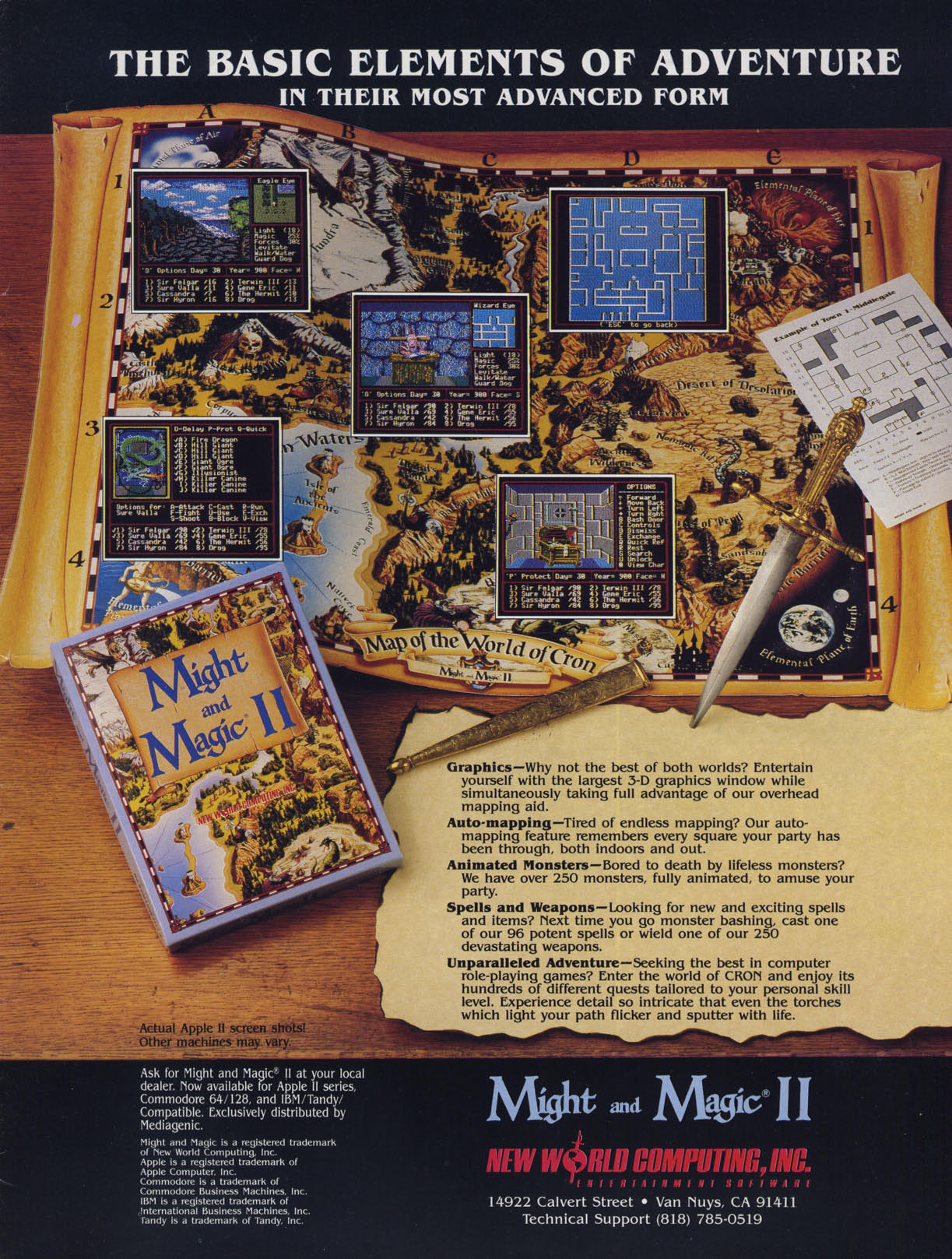 Might and Magic II, subtitled “Gates to Another World”, was originally developed as a computer role playing game for the Apple II in 1986, ported in 1988 to the Commodore 64, DOS, and Macintosh and later also ported to the Amiga and other computers as well as the Sega Genesis and Super Nintendo. It is the sequel to Might and Magic Book One: Secret of the Inner Sanctum and offers a few improvements over that game including improved graphics, a “delay selector” to control the speed of the game, an indicator to make it obvious when input is necessary, and auto mapping (if you have a character with the appropriate skill).

In this game you control a party of six characters at a time though up to twenty-six can be created. You can also import your characters from the previous game. In addition, you can hire up to two additional characters to join your party. They are controlled in the same way as the rest of your party but you have to pay them a certain amount of gold every day based on their level. New characters, more spells, a larger number of quests and secondary skills were also added (including the cartographer skill that allows auto mapping).

While Might and Magic II spends a lot of time on combat (battles could be massive), there are also plenty of clues to be found, mysteries to be solved and things to discover. There are a number of features unique to RPGs of the time including the fact that your characters age (and can die of old age). Time travel and sci-fi elements were also thrown in to this otherwise fantasy-based RPG.

Might and Magic II received mostly positive reviews and the series was a long lasting one, stretching into ten games for the main series plus a number of spinoffs with their own sequels. Some of these are better than others but I highly recommend the first two and the next 5 or 6 are pretty decent as well. The most recent one (Might and Magic 10) was just released in 2014 and while it is a decent game it obviously bears virtually no resemblance to the first few.

Might and Magic II has been featured in a few compilations but the most recent I could find was a Windows version released in 1998 that included the first five games and some additional stuff. If you want to play this game you are going to have to break out some old hardware of one kind or another or use an emulator. Pictures above are from the Commodore 64 version of the game.