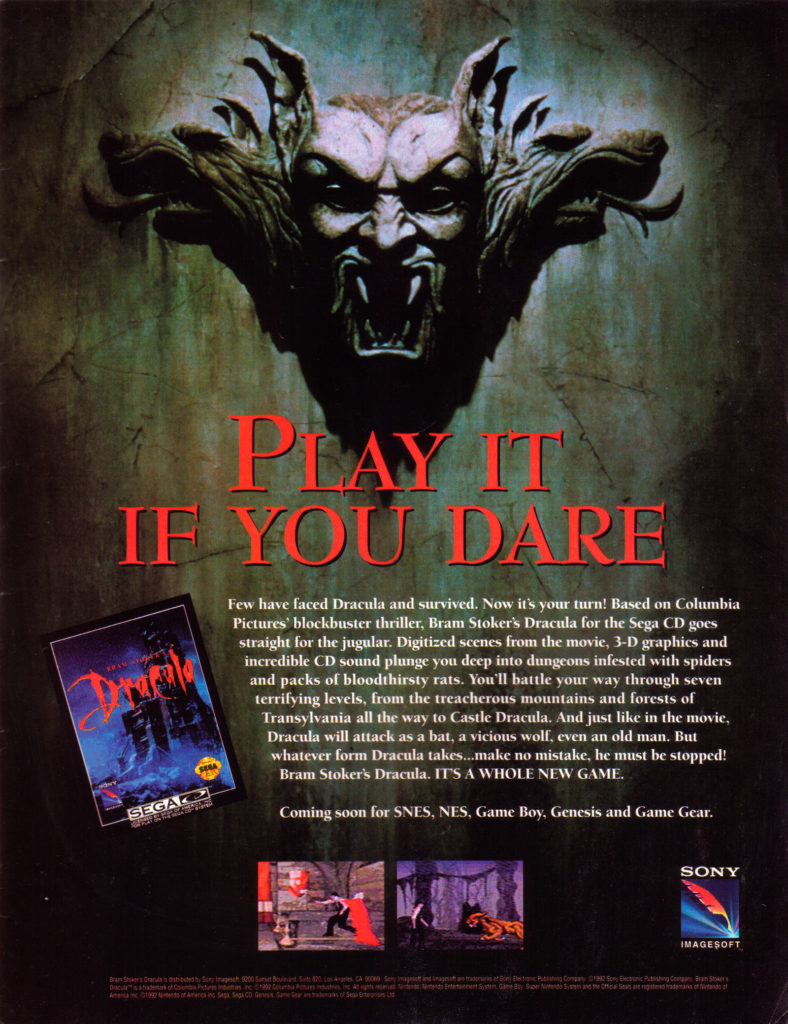 Bram Stoker’s Dracula is a video game based on the movie of the same name that was released in 1992 (which in turn is based on the 1897 novel). The game was released in 1994 and came out on a large variety of systems. For the most part, they were all significantly different from each other. This ad highlights the Sega CD version of the game. There were also regular Sega Genesis, Super Nintendo, NES, Game Boy, Game Gear, Sega Master System and DOS versions of the game. The 8-bit versions were mostly the same with the Sega Master System and Game Gear versions having slightly better graphics than the NES version and all three obviously being better than the Game Boy version. The 16-bit SNES and Genesis versions were completely different from the 8-bit versions but similar to each other except for minor differences. The last version to come along was the DOS version. This one was unique because it was more like a first persons shooter instead of a platform action/adventure game. With all these different variations of the game you would think at least one of them would be decent. You would be wrong. This game suffers the same fate as the vast majority of movie licenses. It is mostly crap or at best sheer mediocrity. The 8-bit versions are the worst with the Game Boy being worst of the worst. The others are probably a toss-up and depend on personal preference. If you like digitized backgrounds and characters, choppy animation and grainy, blurry FMV then go for the Sega CD version. Minus most of the FMV then go for the Amiga. More standard but below par 16-bit graphics and animation then pick the Genesis or SNES versions. Prefer first person shooter type games? Then go for the DOS version. It doesn’t really matter though as you are sure to be disappointed no matter which one you choose. I thought the movie was decent enough though.

The ad above is from the April/May 1993 issue of Mega Play and all screen shots are from the Sega CD version of the game.