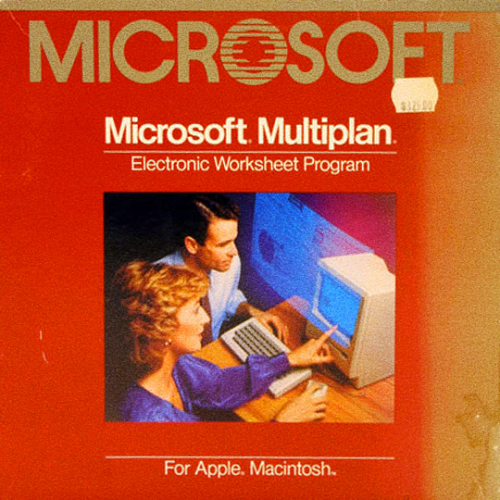 Multiplan was an early spreadsheet program developed by Microsoft. Known initially by the code name “EP” (for “Electronic Paper”), it was introduced in 1982 as a competitor for VisiCalc.

Despite the release of Microsoft Chart, a graphics companion program, Multiplan continued to be outsold by Lotus 1-2-3. It was replaced by Microsoft Excel, which followed some years later on both the Apple Macintosh (1985) and Microsoft Windows (1987).

Around 1983, during the development of the first release of Windows, Microsoft had plans to make a Windows version. However the plans changed a year later.

A fundamental difference between Multiplan and its competitors was Microsoft’s decision to use R1C1 addressing instead of the A1 addressing introduced by VisiCalc. Although R1C1-style formulae are more straighforward than A1-style formulae[4] — for instance, “RC[-1]” (meaning “current row, previous column”) is expressed as “A1” in cell B1, then “A2” in cell B2, etc. — most spreadsheet users prefer the A1 addressing style introduced by VisiCalc.

📂This entry was posted in Computer Arcana 📎and tagged Microsoft Multiplan