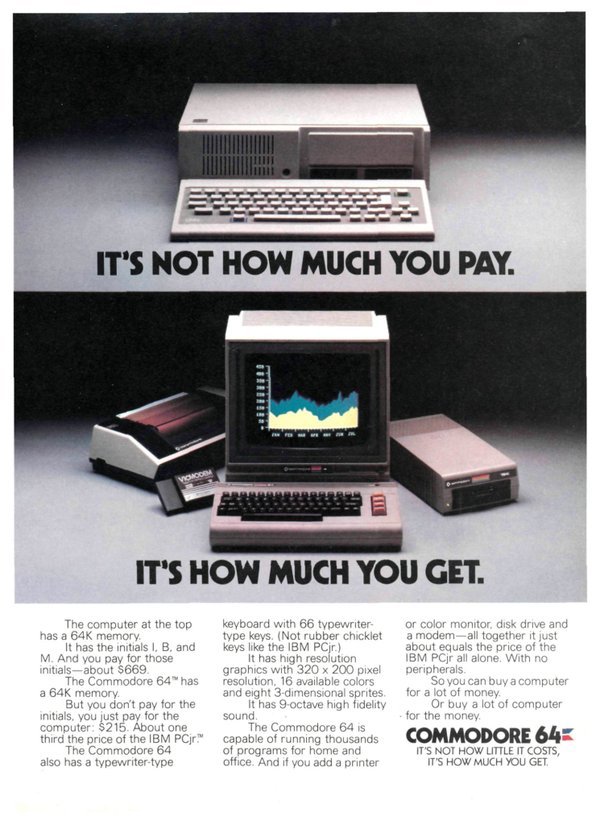 This particular Commodore 64 ad compared the Commodore 64 to the, at the time, recently released IBM PCjr. The Commodore 64 was introduced a couple of years earlier and the IBM PC had also been around for a few years. However, the PC was still meant more as a business machine and was very expensive for a home computer. The PCjr was meant to be IBM’s competition for the home. The PCjr failed miserably and it would ultimately be cheap PC clones that brought the PC to homes.

There really wasn’t any competition here. With the Commodore 64 you got vastly more for your money that with the PCjr. Some of the key points mentioned in the ad:

Both computers came with 64K of RAM. While pretty much every piece of software in existance for the Commodore 64 (which was already quite a lot by this point) was designed to work in 64K, 64K was not enough for many PC programs. While the PCjr was PC compatible for the most part, the amount of RAM limited what software could be run on it.

At the time of this ad, the PCjr cost $669 while the Commodore 64 only cost $215. In both cases these prices were for the basic computer only. For the cost of just the PCjr, with a Commodore 64 you could also get a disk drive, monitor, printer and modem making it a vastly more usable system than the PCjr. You could of course get all of these peripherals for the PCjr as well but you would spend thousands doing so.

The keyboard was also far superior on the Commodore 64. While not the best keyboard in the world and also not detachable like the PCjr keyboard, it was still a much nicer keyboard overall than the rubber chicklet style keyboard that came with the PCjr. For anyone who knew how to type even a little, those chicklet style keyboards were pretty unusable. I suppose if you were more of a hunt and peck style typist then it wouldn’t matter quite as much.

Finally, unlike the PCjr (and the PC in general), the Commodore 64 had custom sound and graphics chips (the SID and VIC-II respectively). The CPU may have been a little slower in the Commodore 64 than in the PCjr but it more than made up for it with these custom chips. This made the biggest difference in games of course but it also helped with any k