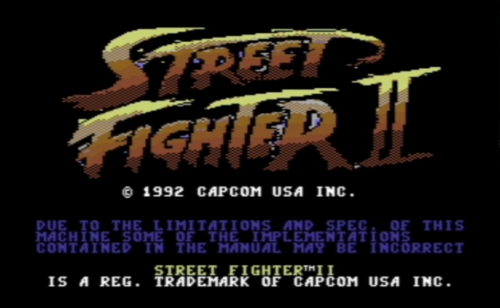 It would appear that this conversion was just an attempt to quickly and cheaply capitalize of the SF II craze of the time. The graphics, sound and music are not up to C64 standards and gameplay is glitchy. In addition, load times are painfully long. To be fair, there are some people that enjoyed this game and it is impressive that a conversion was even attempted but it ultimately has little resemblance to the original, at least in terms of game play.

One of the other problems is the fact that the Commodore 64 only had one button on its controllers. Street Fighter II was designed with six buttons in mind. While this is far from ideal, the Commodore 64 has proven that fighting games are possible with such a configuration. A far superior fighting game that was released many years earlier is Yie Ar Kung Fu. The graphics, music and sound are better and it incorporates several intuitive moves with only a joystick with one fire button. A much better Street Fighter II could and should have been done for the C64 but instead it got a rushed conversion that counted on name recognition alone for sales.