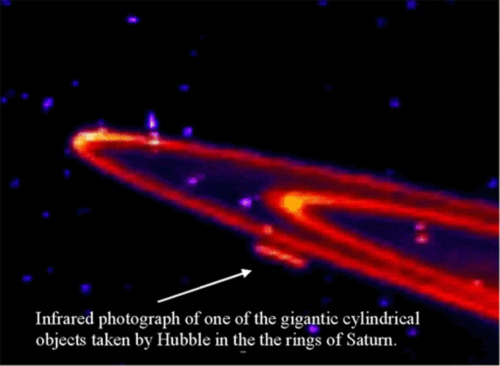 This is a 1996 series of infrared photos taken of Saturn’s Rings. These were taken with the Hubble telescope. Scientists stated that from these photos in sequence they have discovered new moons of Saturn. What wasn’t explained was the object’s that were marked A, B and C orbiting Saturn’s outer ring. These huge cigar shaped object’s are clearly shown following a definite path in an orbit along the edge of the ring. Could these be gigantic space craft or mother ships? One could speculate that these may be extraterrestrial mining ship’s, harvesting some type of mineral from Saturn’s outer ring. Who knows? I think we can rule out a glitch in the photography since they show up in six of the ten photos, and clearly show they are moving. John Lear stated that he believes there to be a spacecraft orbiting in or near Saturns rings that measures 31,000 miles long and 2,400 miles wide!

Now take a look at this photograph that was taken by the Russian Phobos Probe in 1980 shortly before it was destroyed. The Russian space agency issued a press release saying that they had photographed a 15 mile long cylindrical metallic object, which they thought could be a UFO.

« Millions Died Thanks to the Mother of Environmentalism Sega Saturn »