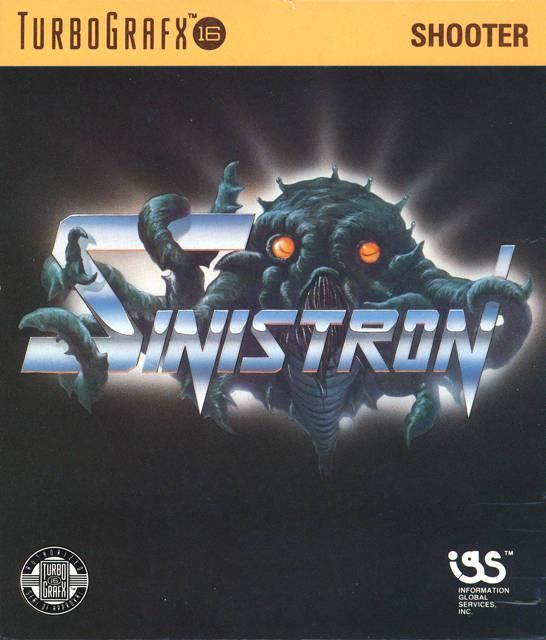 Box art for “Sinistron,” a side-scrolling spaceship shoot ‘em up for the TurboGrafx-16 system released by IGS / NEC in 1991.

Sinistron was released by IGS for the TurboGrafx-16 in 1991. In Japan where the TurboGrafx-16 (or PC Engine as it was called there) was much more popular, it was titled Violent Soldier. The TurboGrafx-16 was only a modest success in the U.S. It was released around the same time as the Genesis and was hugely popular in Japan but that success never really translated to North America. Part of the problem (as it always is) was a lack of recognizable games. Even though Sinistron was an excellent shooter, few in the U.S. have probably heard of it.

Sinistron has some similarities with R-Type in terms of look and gameplay. The unique catch with this game is that your ship has indestructible “jaws” on the front. Depending on the upgrade you have, these jaws can be open wider giving you a wider field of fire but making your ship more vulnerable, or can be closed more which reduces your field of fire but offers more protection.

The TurboGrafx-16 not being very popular relative to other systems and Sinistron not being a very recognizable game makes for a game that is somewhat rare. Rare enough to demand pretty high prices on eBay anyway. However, it is an excellent shooter and if you can get your hands on it for a decent price then by all means do so. I am not aware of any ports or remakes so other than emulation the TurboGrafx-16 is your only option for this game.

One Response to Sinistron (TurboGrafx-16)