1942: The Pacific Air War is a combat flight simulator that was developed by MicroProse and released in 1994 for DOS based computers. The Gold version includes an expansion and some multimedia extras (some of which work only with Windows 3.1, not DOS).

This really was an excellent simulator for the time. Graphics were excellent, game play was even better, and the realism was about as good as it could be. Ten different aircraft were available, both Japanese and U.S. Individual missions could be played or entire campaigns. This game could also be played as a strategy game. In this case, your aircraft could be positioned strategically and then you could switch between them to fly whichever one you want. 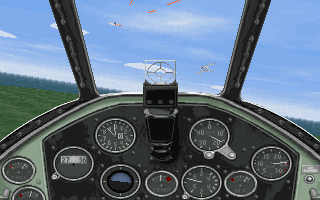 MicroProse made quality simulations throughout its existence, especially in the 1980s and first part of the 1990s. While MicroProse is sadly gone, it lives on in spirit through other developers that owe their existence to MicroProse, including Firaxis. Many older MicroProse games are still available to play in one form or another today including this one. 1942: The Pacific Air War is available on Steam for a few bucks. While I’m often not crazy about older simulators, particularly flight simulators, this one holds up pretty well in terms of fun value. The graphics don’t live up to today’s standards of course but they are good enough.