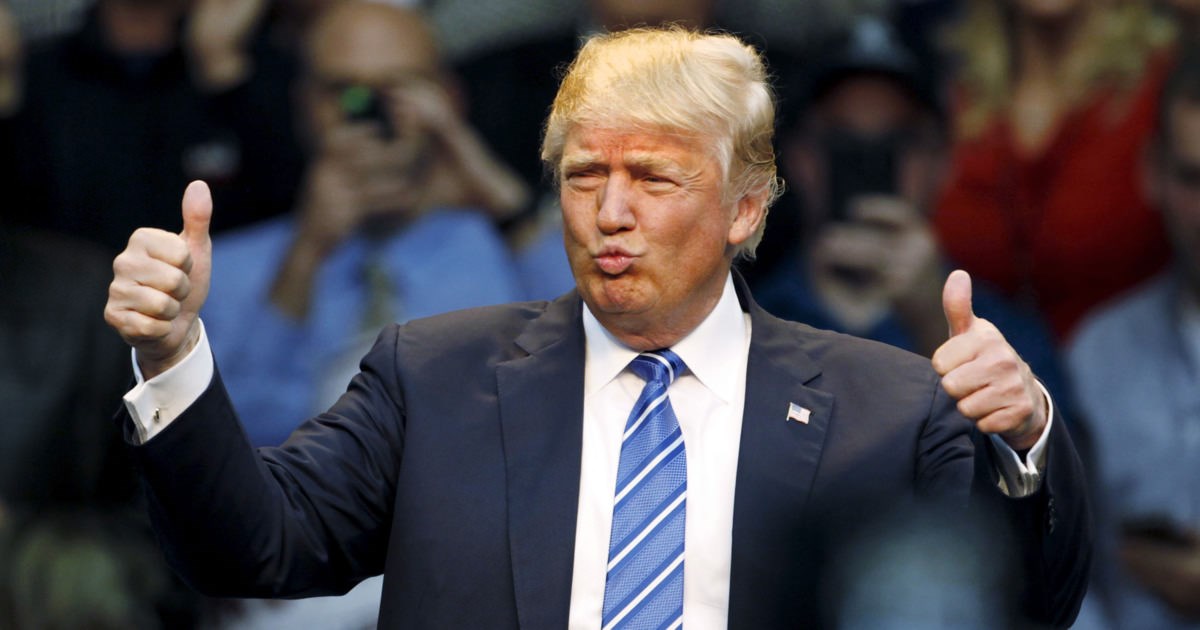 It was only days after Donald Trump clinched the Republican nomination that the mask (such as it was) came off. Suddenly he was telling multiple interviewers that he could be talked into raising taxes, boosting the minimum wage, and printing enough money to pay the national debt in cheap dollars.

“On my plan [taxes are] going down. But by the time it’s negotiated, they’ll go up,” Trump said. “In my opinion, the taxes for the rich will go up somewhat.” (After the outcry, he claimed he meant up from his proposed cuts.)

As for the minimum wage, he talks like Obama, completely uninterested in market forces, as if what people are paid is purely at the discretion of political managers: “I think people have to get more… I don’t know how you live on $7.25 an hour.”

Oh, but he says he would leave it to the states to decide the height of the wage floor, which raises the question of why he is talking about it at all, since that can presumably happen now. The Department of Labor he would head as president possesses plenty of power to strongly nudge states however it wants. If Trump favors a higher wage floor, he is going to get it.

And, incidentally, such a higher floor could be an crucial part of an anti-immigration policy as well. If low-wage jobs become illegal, immigrants have no reason to cross the border at all. The eugenicists who passed the 1920s immigration laws understood this well.

As for the national debt, he says it can’t be paid, we can’t default, and so there is only one way forward: “print the money.”

Wow, what gives? Somehow this torrent of policy ideas has shocked even Vox to notice “the left-wing economics movement that Trump is adopting.”

Being generally opposed to tax increases and holding the line on job-killing minimum wage increases are two of the things that Republicans at least pretend to be good at. In any case, no Republican presidential candidate in my lifetime has said he would increase taxes, so this is a departure. And certainly none has actually toyed with the idea of inflating away the debt, at least not publicly.

It’s a departure given his party, but no one should be startled at his willingness to grow government. If you think about the core of his program, it has always been about that. He wants to prevent American businesses from hiring people from abroad. He wants to take private property on the border and nationalize it by building a wall. He has praised Japanese internment, called for shutting down parts of the Internet, pushed for mass surveillance, and advocated vast new infringements on the right of Americans to buy products from abroad.

That’s just for starters. From the very beginning of his campaign this past summer, he has worked to build up a case for bigger and more intrusive government. He began with rhetorical assaults on immigrants and international trade, while extolling his managerial prowess as a much-needed CEO for the whole country.

But not Trump. He posits himself as the head of the whole country, running America the same ways he runs his businesses. He would stamp his name brand on the nation, as he does with everything else he owns, thereby imparting it with his own purported greatness. Probably the last president who was so open about his belief that he runs the nation was FDR himself.

That Trump casually mentioned the possibility of raising taxes on the “rich” (we know how that goes), or inflate away the debt, should have caused no shock or alarm. It follows from his own philosophy of government, which is not that we live under a rule of law, but rather than we should be living under the rule of one man.

Why would anyone believe that Trump is anything but a state builder? Much of it has to do with the strange way in which people infuse candidates with their own ideological longings, hoping against hope that Trump shares their values.

Trump has fashioned himself as anti-establishment, a classic populist. You might think that has something to do with being anti-government, but you would be terribly wrong. For him, “anti-establishment” has always simply meant that the wrong people are in charge.

He has been disdainful of political correctness,  made the right noises on guns and global warming, and so on. He opposes the left, which the naive observer might misinterpret as opposing government overreach.

Surely we should know better. The twentieth century, during which time fascism wreaked havoc on liberty, and did so in the name of opposing the communist threat, was not that long ago. In any case, illustrious minds like F.A. Hayek and Ludwig von Mises bore witness to this and tried to tell the world about the dangers of rightest authoritarians.

They both published books in 1944 (Road to Serfdom and Omnipotent Government, respectively) that pointed out that despotism comes in many flavors. It can be left and it can be right. Opposing one and favoring the other is not the same as backing liberty.

The right and left legs of statism dance in a devil’s ballet. One gains control and fosters resentment and reaction. The other takes over and wages war on its political enemies. The population is divided. It becomes a struggle over power, but each has an interest in gaining more. It’s better to think of right and left as factions of the same party. They can be right about some things some of the time but neither pushes simple freedom as an answer to social and economic problems.

No One Wins the Culture War

For generations, the Republican Party has tolerated within its ranks a liberty-leaning minority. There have been many iterations: the supply siders, the “leave-me-alone” coalition, the Tea Party, and so on. Their interests have generally aligned with the merchant class and rank-and-file bourgeoisie that is fed up with regulation, taxes, and wars.

With the traditional Republican coalition now shattered, Americans are newly acquainting themselves with a different and more consistent authoritarianism that has a right-wing flavor. I’ve argued elsewhere that this is accurately called fascism. It might seem like a movement organized to stop the march of the left, but it uses the same means to achieve ends that are only slightly different in cultural tone and appeal.

You can read a thousand definitions on what this is, but I favor Ludwig von Mises’s own analysis. He says that at minimum fascism is nativist on trade and migration and extols the leadership principle over national life. It is a form of socialism: it necessarily intervenes in the market. But its socialism dispenses with the parts that the middle class finds so annoying about the left. You can nominally keep your property, although in reality you merely administer it for the state. Family and religion can remain intact. What is required is that you direct your primary loyalties to the central state.

Trump has said something similar: “The nation-state remains the true foundation for happiness and harmony.”

Beyond the Red Scare

Whenever I post about Trump, I get angry commentators demanding to know why I’m not railing against Clinton and Sanders. Every amount of rhetoric against Trump, they say, only helps the left and its agenda. But it is precisely this approach (“the enemy of my enemy is my friend”) that has empowered regimes that are among the most murderous in history.

True liberals should never be enticed by their seeming promise. In order to see and understand the danger, we have to look beyond the red scare and realize that politics is more complicated than merely opposing the worst evil. Those “lesser evils” who lower our guard by exploiting our fears of “greater evils” are often the greatest evil of all.

« Space Coast Nerd Fest 2016 – Geekapella – The Man Who Throws The Tetris Piece In Hearing on Internet Surveillance, Nobody Knows How Many Americans Impacted in Data Collection »