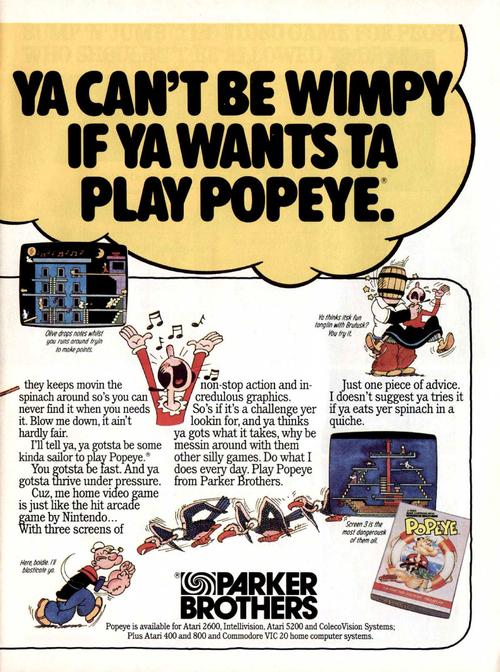 Popeye was an arcade game released by Nintendo and licensed by Atari in certain regions based on the cartoon and comic strip of the same name. Popeye never became a franchise and is not quite as well known as other iconic video game figures but it was a pretty big deal at the time.

In an interesting twist of fate, Donkey Kong was originally planned to be a Popeye themed game. However, Nintendo did not get a license to use the characters in time for that game so it became Donkey Kong instead and a new Popeye game was developed a little later. Popeye was one of the first three games released for the Famicom in Japan. Parker Brothers ported the game to a wide variety of systems including the Atari 5200, Atari 2600, Atari 8-bit computers, Commodore 64, ColecoVision and others. Oddly, the ad mentions the Atari 2600, Intellivision, Atari 5200, ColecoVision, Atari 400/800, and VIC-20. However, the game was never officially released on the VIC-20 but it did come out on the Commodore 64 and a few other systems that aren’t mentioned. I can only assume changes were made after the ad went to print. However, despite the lack of an official VIC-20 port, a nice homebrew port was made in 2015 proving that development on vintage systems is alive and well.

The game itself, unsurprisingly given its lineage, shares some similarities with Donkey Kong. The only actions for Popeye are climbing and punching, your goal being to rescue Olive Oil from Brutus. The only other recent port besides the VIC-20 port was an enhanced remake released for mobile phones in 2008.